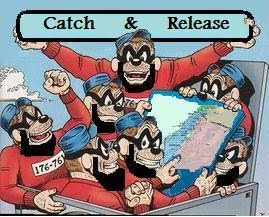 Thanks Ada, we’ll be seeing ya soon!
Tundra Tabloids’ colleague and friend, TINSC, fed the TT the following story late last night, stating that “I could have predicted this! ” Well surprise surprise, the Nobel academy finds the right kind of Israeli to bestow their prize upon, a Lefty who believes that poverty and a sense of injustice is behind Palestinian terrorism against Israelis.
HAHAHAHAHAHAHAHAHAHA
Such tomfoolery can’t be taken seriously, but yet they try to be taken seriously every chance they can get. Think about it, those Arabs sitting in Israeli jails have been invovled in some of the most heinous crimes, committed or to be committed, against Israeli civilians, and this loon wants to just, set them all free!
There are all types of Arabs locked up behind bars, murderers, rapists, bomb makers and an assorted bunch of criminals of all stripes, but for Dr.Ada Yonath, it’s all the same. “It’s not clear to me why we’re holding these Palestinian terrorists, or what we call ‘terrorists,’ instead of releasing everybody who is [in our jails] from the outset, without any connection to a deal for Schalit,”  Like I said, a real loon. 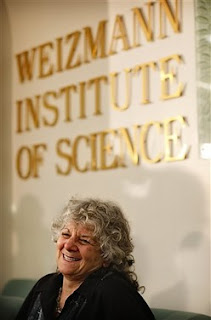 Ada Yonath:
I’m so sorry we call you terrorists
come on over for some tea and bisquits
Ada Yonath: Israel should release all terrorists

Prof. Ada Yonath, who was informed last week that she would become the ninth Israeli winner of a Nobel prize for her work in chemistry, went on the record on Saturday regarding an entirely different subject, stating that Israel should release all Palestinian prisoners, regardless of whether it would be part of a deal to secure the release of kidnapped IDF soldier Gilad Schalit.
“It’s not clear to me why we’re holding these Palestinian terrorists, or what we call ‘terrorists,’ instead of releasing everybody who is [in our jails] from the outset, without any connection to a deal for Schalit,” Yonath said during an interview with Army Radio.

[TT: Either this woman has just awoken from a two decade old coma, or she’s suicidal. ]

Yonath continued by analyzing the motivation behind terrorism and stated that keeping Palestinians incarcerated for extended periods of time would not help Israeli security, but would exacerbate the threats.
“We need to think about ways to reduce their motivation to kill and be killed,” she said of the Palestinian inmates. “We have it in our power to change the current situation, when a man sits in our jails for a number of years, and around him friends and family become angry. That is how we create terrorists.”

[TT: Totally clueless about Islam and the jihad, the religious/political duty to kill the infidel and retake land once deemed to be a part of the Islamic world. This woman obviously is even more Left of Left than the average Israeli.]

“Regardless of these inmates, there are enough people who are currently free on the other side who are able to hurt us,” Yonath added. Returning to the issue of Gilad Schalit, the soon-to-be Nobel prize laureate said that releasing all of the prisoners would help avoid future kidnappings.
If there weren’t terrorists sitting in our jails, they wouldn’t kidnap Israelis in order to bring about their release,” Yonath said. “The moment we hold onto terrorists, this then gives the other side an appetite to launch kidnapping operations. The moment we no longer have terrorists and anybody to release, they won’t have any reason to kidnap.”

[TT: Hardly a reason to let everyone go. What deterrent is there to stop anyone from taking the step to actually murder someone, if they know that they’ll get a get out of jail free card from loons like this?]

Questioning those who speak of a terrorist ideology, Yonath said that she believed the motivation behind Palestinian terrorism was simply a lack of hope.
“These people – for the most part – have no hope or vision, and therefore they don’t care whether others live, and so they will jump at the opportunity to go to heaven and receive a little honor,” she said. “This doesn’t happen to people with a life and hope.”

[TT: It’s not a terrorist ideology, but an Islamic ideology behind the jihad, and as long as fools like Ada Yonath keep mouthing off about how we in the West are the ones at fault here, the jihad will not founder because idiots like these keep giving them hope.]