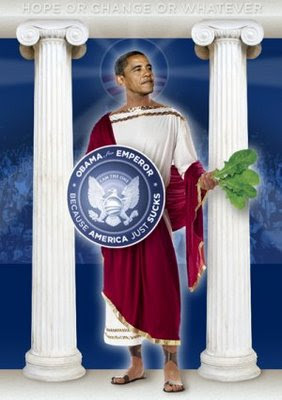 A GIANT IN HIS OWN MIND
What do you call an elected politician who works against the self interests of those who placed him into power? A traitor. Here are a couple of articles worth exploring, one in full, and the other buried in the link. The latter, by Charles Krauthammer is of such length and depth, that it’s wiser to just follow the link and take the time needed to read it in full, both pages, and be prepared, it’s indeed a long one.
MMM…MMM…MMM Barack Hussein Obama is purposefully taking the United States into headlong plunge into complete ruin, in order to completely rearrange and fundamentally change it beyond all repair. By creating a class of civil servants and a constituency that is dependent upon the largesse of the US government, it will render American dynamism to resembling that of a moribound Europe.
This is the first American president to actively work against the self interests of the United States, and the only thing standing in the way of a complete disaster is the upcoming congressional elections next year. The Republicans need to get their act together and win back both houses of congress if they want to save the union from complete ruin. KGS
The Styrofoam President
Monte Kuligowski

All President Obama needed to further illustrate the emptiness of the Nobel Peace Prize committee’s decision were the Styrofoam columns. White House staff should have busted them out of prop storage and placed them behind Mr. Obama as he responded to the shocking news. The fake columns — used at the 2008 Democratic National Convention — illustrate the fakeness of the Obama presidency better than anything.
In terms of accomplishments, Obama stood naked before the microphone and the whole world knew it.
Amusingly, everyone from so-called mainstream journalists, to Press Secretary Robert Gibbs, to the President himself had to acknowledge that Obama had accomplished nothing to merit the prize. Yet they all had no choice. There simply was nothing to point to, but words and feelings. If they could have spun it they would have. But there was not a string of thread to spin.
It was sort of comical, really.
This is the first time in U.S. history in which the acting President had believed that he was too inexperienced to run for the office — he said so himself; the President’s Vice President concurred, emphasizing his foreign policy naiveté; and the President’s Secretary of State also concurred, forcefully arguing that Obama was naïve and inexperienced. Amazing, but true. Obama was the first truly green candidate.
The Democrats have a real problem with genuineness. Both Biden and Clinton know the man is out of his league or they didn’t really believe he was wet behind the ears. Either way, they are amazingly disingenuous. Same with Obama. He knows he’s a pretender; or he didn’t really mean to say he wasn’t ready.
Obama was rocketed to star-status immediately after his inspiring reading from a teleprompter at the Democratic National Convention in 2004. Though, he allegedly was endorsing John Kerry, he sounded like the perfect candidate for president. His speech was filled with moderate and conservative undertones. His words convinced listeners that he was post-partisan. And, as Joe Biden said, he was “bright and clean.”
It’s no small irony that the man who was rushed into the presidency feels the need to rush his social and spending (redistribution) agenda.
Mr. Obama has already done enough damage in eight months to last for four years. In theory, he could kick back and be content with the unprecedented debt he has buried the country with. But, as George Lakoff notes, to Obama budgets are “moral documents.” A $ 9.1 trillion deficit is not enough; he must press on.
Receiving the so-called Peace Prize will not help. Mr. Obama will feel compelled to accomplish something big to fill the shoes he’s been handed. As we have already seen, alas, Obama’s goals are driven by ideology and are not good for the country.
So I conclude by pleading, please Mr. President don’t do anything to earn the Nobel Peace Prize. Your $787 billion “stimulus,” alone, will bring enough peace and good will to those on the receiving end of redistribution.