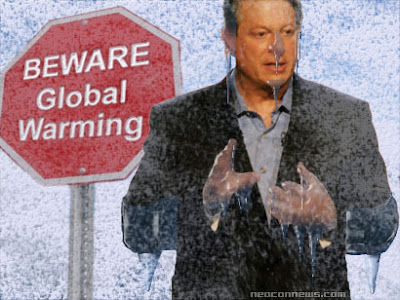 The Gore Effect
The key to understanding the importance of this story is not the fact that the earth has had its last warmest global temperature in 1998, nor that scientists -of the dreaded sceptical variety- have growing evidence that links heating and cooling trends to natural earth and solar cycles.
The main point why the Tundra Tabloids is interested in running this story, is solely because the BBC is actually running the story itself, and admit that the science to man made induced “global warming” is in fact… not settled.
It’s becoming to obvious that the supporters of man made global warming are not the only ones with supposedly convincing data, and that a vast number of scientists have as much right to question their fellow colleagues data and have their views presented….without fear of being cast into the outer darkness with the wailing and gnashing of teeth. Especially the gnashing of teeth. Read and enjoy. KGS
What happened to global warming?
This headline may come as a bit of a surprise, so too might that fact that the warmest year recorded globally was not in 2008 or 2007, but in 1998.
But it is true. For the last 11 years we have not observed any increase in global temperatures. And our climate models did not forecast it, even though man-made carbon dioxide, the gas thought to be responsible for warming our planet, has continued to rise.
So what on Earth is going on?
Climate change sceptics, who passionately and consistently argue that man’s influence on our climate is overstated, say they saw it coming. They argue that there are natural cycles, over which we have no control, that dictate how warm the planet is. But what is the evidence for this?
During the last few decades of the 20th Century, our planet did warm quickly.
Sceptics argue that the warming we observed was down to the energy from the Sun increasing. After all 98% of the Earth’s warmth comes from the Sun. But research conducted two years ago, and published by the Royal Society, seemed to rule out solar influences.
The scientists’ main approach was simple: to look at solar output and cosmic ray intensity over the last 30-40 years, and compare those trends with the graph for global average surface temperature.
And the results were clear. “Warming in the last 20 to 40 years can’t have been caused by solar activity,” said Dr Piers Forster from Leeds University, a leading contributor to this year’s Intergovernmental Panel on Climate Change (IPCC).
But one solar scientist Piers Corbyn from Weatheraction, a company specialising in long range weather forecasting, disagrees. He claims that solar charged particles impact us far more than is currently accepted, so much so he says that they are almost entirely responsible for what happens to global temperatures.
He is so excited by what he has discovered that he plans to tell the international scientific community at a conference in London at the end of the month. If proved correct, this could revolutionise the whole subject. What is really interesting at the moment is what is happening to our oceans. They are the Earth’s great heat stores.
According to research conducted by Professor Don Easterbrook from Western Washington University last November, the oceans and global temperatures are correlated. The oceans, he says, have a cycle in which they warm and cool cyclically. The most important one is the Pacific decadal oscillation (PDO).
For much of the 1980s and 1990s, it was in a positive cycle, that means warmer than average. And observations have revealed that global temperatures were warm too. But in the last few years it has been losing its warmth and has recently started to cool down. These cycles in the past have lasted for nearly 30 years.
Read it all here.