Politically Incorrect was there to cover it
GOV has VH’s translation from Politically Incorrect:
“Meanwhile, the first photos and reports from the BPE (Bürgerbewegung Pax Europa, “Citizens Movement Pax Europa”) rally in Berlin are coming in. With two hundred participants, the rally may be regarded an initial success of a new civil resistance movement against the Islamization of Europe. 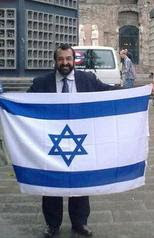 The word on the Internet spread about the dream of the Left Party [Die Linke], Antifa, Turkish fascists [Grey Wolves, Ottoman Nazis] and the Greens, to explicitly cause “Cologne conditions” in Berlin today [i.e., attempts to obstruct the rally], and thus also try to criminalize the expression of moderate Islam criticism that comes from the heart of the civil society, but the effort failed miserably.The few incited youths were unable to disrupt the event. At the fringes of the rally some discussions occurred between Muslims and participants in the event. In the next few days we will publish the speeches on PI as videos.
A comment on PI News: The fact that Robert Spencer was invited, and accepted the invitation, and also actually came to Berlin was a success… We need more such expert speakers in the future. Congratulations to BPE.”
This is of course great news that Robert Spencer makes it to these events, and helps to provide a good backdrop for the demonstration. I think Robert’s smile is as big as the Israeli flag he’s proudly holding. We need more of his calibur to help with the fight against Islamization, and something tells me that there are bright, upcoming stars within the movement that look to be as promising as Robert. Great going all around. KGS