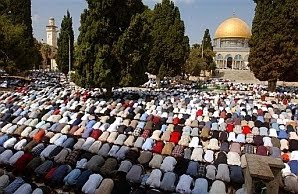 The direction Mohammedans point to
signifies the order of importance

The followers of the mad prophet can’t even tolerate a few Jews walking around the Jewish Temple mount. So much for that tolerance and peace that the ROP claims it represents. Yeah, riiiiight. KGS

Policemen wounded in Temple Mt. riots
Twelve policemen and 15 rioters were wounded Sunday in riots on the Temple Mount in Jerusalem and later in the Old City. Approximately 150 Muslim worshipers participated in the disturbance on the Temple Mount, which began when a group of Jewish visitors was admitted into the compound.
Rioters hurled rocks at the group and at policemen who were escorting them, lightly wounding two policemen. Police responded with stun grenades and the visitors were escorted away.
The riots died down, but the Temple Mount was subsequently closed off to visitors. Later some rioting developed on the streets of the Old City, and additional policemen and rioters were wounded in those scuffles. Several rioters were arrested by police.
Rabah Bkirat, an official with the Muslim religious body in charge of managing the site, said some of the protesters had come because of rumors of an “invasion” by Jewish settlers. When a group of some 15 Jews entered the grounds accompanied by police, the protesters began chanting slogans and only threw stones after police used force, he said.
Following the riots, Police raised their alert status across the country for fear of further violence. Meanwhile, Hamas called on Palestinians and all Arabs to take to the streets in protest of the events.