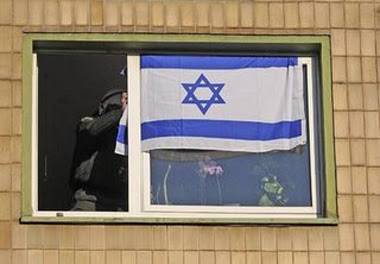 Is the same that
applauded this 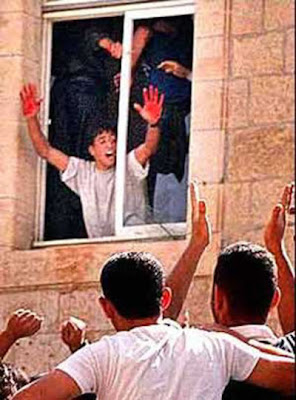 Ramallah, capital of FakestinianstanListen up folks, it doesn’t matter what you say or do, the followers of the madman prophet will get enraged at the drop of a hat, and at the cossing of the eyes, you just need to exist in order to piss them off royally. The Dhimmified German court in the city of Bochum who fined the woman who dared to show the flag of the world’s only Jewish state, should be tried themselves for the high crime of stupidity and gross violations against the right to express yourself politically.They tossed this lamb to the wolves in the deluded assumption that they would be appeasing the Muslim masses, who are bound to interpit the move as a sign that they can do as they like while the non-Muslims take to pissing in their socks. The German court’s sh*tting on free speech mimics the Finnish district court’s recent dumping of free speech, that resulted in the fining of city councilman, Jussi Halla-aho, 330 euros for calling madman Mo a pedophile.While the both cases have different elements to them, in essence, they’re the same. In fear of violating the sensabilities of the intolerant, both courts in Germany and in Finland, chose to trample over free speech rights, though common sense and reason would have dictated otherwise. We are all headed for tyranny if we allow this to proceed any further. KGSStudent fined for Israel flag in Germany

A local district court in the West German city of Bochum fined a student 300 Euros on Wednesday for displaying an Israel flag at a demonstration organized by Muslim organizations against the IDF Operation Cast Lead in January. According to Der Westen, a regional paper in Bochum, the public prosecutor termed the Israeli flag as “provoking” within a special situation. The 30-year-old student, who spoke on condition of anonymity because she fears for her safety due to “massive problems with Nazis”, told The Jerusalem Post on Wednesday that the “Israeli flag is a provocation for the anti-Semites.” She asked rhetorically, “What is provocative about an Israel flag?” The public prosecutor in Bochum was not available for an immediate comment on the case. According to Der Westen, the local district court judge deemed the protest of the five activists expressing solidarity with Israel as a “dangerous situation.” A spokesman for the district court, Volker Talarowski, told the Post that there was a “violation of the right to assembly” and the court’s decision was issued “independent of a political motivation.” Talarowski added that the pro-Israel demonstrators failed to register their protest 48 hours before the event. Yet the student, who is appealing the fine, said a special regulation permits “spontaneous” demonstrations without a pre-registration. In response to a hardcore anti-Israeli demonstration in Bochum attended by 1,600 protesters on January 17, the student, along with four pro-Israeli activists, displayed a banner stating “Against anti-Semitism and fascism: Solidarity with Israel” as well as the Israel flag. She told the Post that pro-Palestinian supporters “compared Israel with Nazi Germany.”Chants of “children murderer Israel” and “Israel terrorist” filled the protest as well as a banner reading “stop the Holocaust in Gaza.” “There is no basis” to draw a parallel between Nazi Germany and Israel, she said. “A Holocaust did not take place in Gaza. Israel defended its territory from rocket fire” emanating from Hamas, added the student. She termed the argument comparing the Israeli military operation in Gaza with the Holocaust as anti-Semitic.

In the Der Westen news report, the student said there is a “confusion of perpetrator and victim. You can only call that anti-Semitism.” She told the Post that the protestors in Bochum designated Israelis as Nazis and the Palestinians in Gaza as Jews during the Third Reich. During Operation Cast Lead over 100,000 mainly German Muslims protested across German cities and frequently compared Israel with the Hitler movement. The European Union’s working definition of anti-Semitism defines such comparisons between the Nazis and the Jewish state as a modern manifestation of anti-Semitism, largely because the parallel delegitimizes Israel’s right to exist.