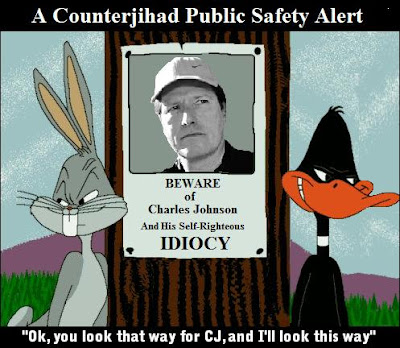 Charles Johnson is in a ”tailspin” over his initial spinning of the facts concerning 9/11 truther, and radical communist “Green Czar”, Van Jones, that he never signed the petition calling for congressional hearings into the governments role in perpertrating 9/11. The Sheik correctly observes that:”CJ likes to claim “he’s keeping the right honest” which is a load of pure bullsh*t, he shills as hard as Daily Kos and Huff Po for Obama, and the “lizards” follow lock step behind him (for fear of being banned) throwing away what ideals they once held….”Ace of Spades then rips CJ a new one, in pointing out that radical communist Van Jones never even disavowed his belief in the 9/11 truther movement: Ace: Charles Johnson Spins for Van Jones:

“Charles Johnson used to hate Truthers. Until a Truther joined his precious Obama Administration. And now? Well, he’s got a cute answer: Of course the Truthers are lying by including Van Jones’ name on their petition. Note he claims this despite the fact that Van Jones himself will not claim it. Van Jones claims to not be a Truther, but he pointedly does not claim his name was falsely signed to the petition.”

Then Michelle Malkin jumps into the fray and delivers a simple silver knife jab into the chief lizard’s main premise, that the radical communist “Green Czar” of Obama’s is not a “Truther”.

“Hoft reports that Jones’s Truther proclivities were showing back in 2002)”:”Yesterday, news broke out that Barack Obama’s communist Green Czar was a 9-11 Truther. The administration much later in the day released a statement saying Van Jones was “not now or ever” involved in the 9-11 Truther movement.Jones said the petition he signed in 2004 did not reflect his views and that he did not carefully review the language in the petition before agreeing to add his name.Not true.This article at Rense.com from 2002 links Van Jones to the 9-11 Truther movement at its infancy:”

But that’s not all! CJ is determined to smear FOX News’, Glenn Beck, as a conspiracy nut for showing the growth of a vast Left-wing radical agenda in America, on his daily talk show! CJ: “Conspiracy theories about the Rockefellers are standard fare for wackos like the John Birch Society and people who rant and rave about the New World Order. Glenn’s showing us his dark roots.”Apparently David Horowitz, from Freedom Center and Front Page Mag, doesn’t believe that Glenn Beck is a nut, he appeared on his show last night, here’s an email alert telling of Horowitz’s intention to appear on the Glenn Beck show:”Special Alert: I will be appearing on the Glenn Beck Show today (Friday 9/4/09) at 5pm ET/2pm PT on Fox News Channel discussing the very topics of this email.” Which is: “Americans – your friends and neighbors – do not fully realize the radical changes Barack Obama and the socialists in Congress are foisting upon our way of life! “Apparently Charles Johnson is so moved by the Obaminator that he can no longer see the trees for the forest. But that’s not a surprise, the Counterjihad movement saw the first signs of his defection to the Left when he began damning the movement as a bunch of “fascists”, and took to disseminating falacious reports about the Swedish Democrat Party and the Flemish Vlaams Belang, sent to him by far Lefty radicals.Yes, Chuckie boy has been giving radical leftists the “benefit of the doubt” for some time now, so his bending over backwards for the likes of the communist “Green Czar and a fake rabbi shouldn’t come as a big surprise to those who have been following CJ’s transformation. KGS