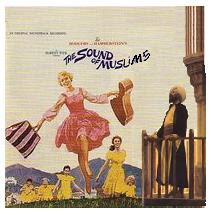 European Leftards laugh to the sound of their own demise

The Tundra Tabloids’ Counterjihad colleague, ESW sends the TT the following report originally published at the Gates of Vienna. KGS

Our Austrian correspondent ESW has translated a sobering report from Kronenzeitung about the breakdown by religion of the latest birth statistics for Vienna. One look at the graph tells you all you need to know:

These statistics are neither secret nor confidential. On the contrary, in schools and on the streets the changes have been apparent for a while. And still: the continuously growing proportion in Austria of newborns with the Islamic faith is handled by the politicians with the utmost discretion. This profound change in society is most glaring in Vienna. This is evident in the official numbers of live births presented by Statistik Austria (official statistics office).

And six years later, in 1990, the statistical changes became even more obvious; albeit not in all of Austria. The proportion of Roman Catholic babies is still at 84%, that of Muslims at 3.8%. However, the ratios have changed dramatically in the capital city of Vienna: 65% of newborns are considered Roman Catholic (following their mothers’ religion) and already 9% are Muslim.

Seven years later, in 1997, the proportion of Muslim newborn in Vienna is at 14.4%, that of Roman Catholics has sunk to 54.3%. Looking at Austria as a whole, the picture may be viewed as more differentiated: 76.5% Roman Catholic, 7.8% Muslim.

The trend continues in this direction in the subsequent years, definitively and increasingly rapidly. In 2000, in all of Austria Roman Catholics account for approximately 72%, Muslims for around 10%. In Vienna, however, live birth statistics account for merely 48%, while Muslims account for more than 18%. The latest data collected in 2008 shows that out of 77,752 live births only 49,444 were Roman Catholics (63.6%). 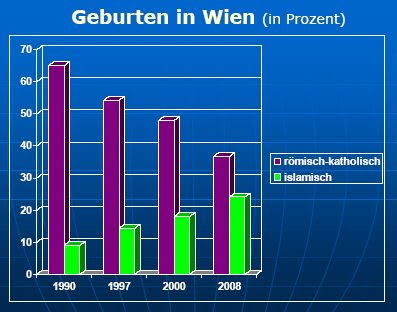 The number of newborns with Muslim mothers (in all of Austria) accounted for 10,883, or 14%. In Vienna, the numbers are even more profound, in line with the preceding years: 36.7% were born as Roman Catholics (6,374), but already 24.1% were born Muslim (4,194). This trend is similar to Vorarlberg [the westernmost state in Austria], where 21% of all newborns were Muslim. In contrast, Burgenland [the easternmost state] shows only 5.2% Muslims.

Although this growth and the subsequent change in society is becoming more and more obvious, this trend is not really new. The movement of Islam [sic!] towards rich industrial nations has been going on since the 1950s.

In about 1990, an intensification of Muslim immigration was registered. The reason for this was, above all, the war in the former Yugoslavia and the resulting flow of Muslim Bosnian refugees, the second largest group of immigrants after the Turks.

This article appeared in Austria’s most widely-read newspaper, Kronenzeitung. It is traditionally critical of the EU as well as immigrants. No other newspaper reported these statistics, certainly not on page 3, following the screaming headline of page 1: “Official statistics prove: Muslims births rising.”

I was alerted to this article by a friend whom I had converted from being pro-immigration to immigration-critical. She said to me, “This article proves the need for your (the counterjihad’s) existence.” This statement gives me hope that people are in fact waking up. But I am afraid it will be too late.