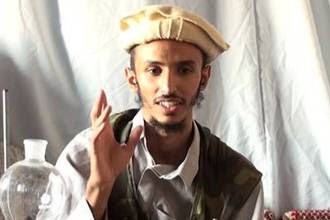 I place my anus into the hands of Allah!
In the non-Muslim world, the term “whacko ” doesn’t even begin to describe this jihadi Butt Bomber, but in Islam, well, he’s just a pious Muslim willing to sacrifice himself for the good of the prophet and the Ummah!

Some will say that the Tundra Tabloids is “supporting the terrorists’ narrative of Islam”, but hey, it’s never about what the non-Muslim thinks or says of Islam that matters to a Muslim, it’s what the orthodox leadership of the faithful say that matters most. And killing those who would water down the prophet’s message is permissible under Islamic law.

If the character of Mohamed was alive today, he would be one of the guys stuffing the dynamite into the arse of Abdullah Hassan Tali Assiri. So the TT is just calling things as they are, nothing more, nothing less, and anyone who thinks otherwise is just naive. KGS

The Butt Bomber in the service of Allah

Assiri called the prince and asked for a meeting saying he repented for his participation in terrorist activities and wanted to give himself up to the authorities. The phone conversation was around five minutes long and in it Assiri told Prince Mohammad that he wanted to “explain everything.” The prince is renowned for his anti-terrorism work in the kingdom, where he encourages militants to come forward.

Assiri goes on to ask the prince for a plane and tells him he will bring his brother along with him. The prince sounded compassionate and said he would try his best to sort things out. Before hanging up, Assiri asked the prince for forgiveness and the prince told him:

“Don’t ask me to forgive you. You are our sons. We want to win you back and make sure no one is abusing you.”Upon meeting the prince, Assiri detonated his explosives in an attempt to assassinate the prince. He succeeded only in killing himself as the prince was only slightly wounded.