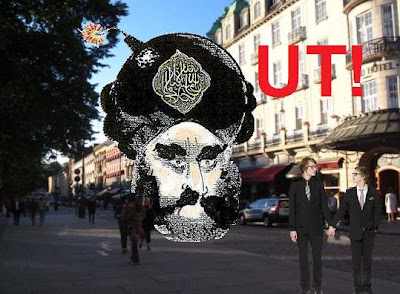 Fjordman over at The Gates of Vienna tells of no go areas for Norway’s Gay community, and that a gay couple was caught tresspassing in a Muslim area, and got attacked for violating their designated area. In short, if your Gay and want to stay healthy in Norway, use condoms and avoid Muslim districts at all costs.

Mugger to Gays: — This is a Muslim districtOn the evening of Sunday 9th of August 2009, a gay male couple were on their way home from a concert and dinner in the center of Oslo and were walking hand in hand along the road just next to where they live, in the Grønland district of east-central Oslo.

“Suddenly a man in his forties walked up to us and asked whether we spoke Norwegian. He then asked, ‘What is this?’ while pointing at our hands,” says Anders (24) to the newspaper Dagbladet. The man, who came from an immigrant background, clearly indicated that he didn’t accept this kind of behavior.

“He said, ‘I don’t like this. This is a Muslim area.’“The couple continued walking calmly along the sidewalk, but the man followed them and kicked one of them hard from behind. Anders’ boyfriend used his mobile phone to call the police, and the attacker quickly fled the scene. According to the Oslo police, the case in now under investigation.

“We take this very seriously. The Norwegian gay couple have explained that they were walking and met a man around 40, who shouted that ‘This is a Muslim area, and we don’t tolerate this stuff here,’“ says Oddleif Sveinungsen from the Oslo police.

Fjordman: Technically speaking, the attacker was simply telling the truth: This particular district is for all practical purposes a Muslim area today, just as countless other urban areas across Western Europe have become, from Athens via Marseilles and the suburbs of Paris, Amsterdam, Brussels and Hamburg to Birmingham.

Those who have been following the Scandinavian scene know that Malmö in southern Sweden is the worst town or city in this part of Europe when it comes to “diversity.” This is true, but when it comes to capital cities, I suspect that Oslo, Norway, is currently the worst among the Nordic countries, several orders of magnitude worse than Copenhagen, Denmark or Helsinki, Finland, and at least as bad as Stockholm, Sweden. A visiting Romanian friend even claimed that Oslo is now “worse than Paris.” I haven’t been to Paris for years and cannot confirm whether this is true.

I suspect that Oslo is still not as bad as some of the larger cities such as Amsterdam or London, but it’s catching up fast, accompanied by wild cheers from the intelligentsia and the heavily left-leaning press.Siv Jensen from the right-wing Progress Party warned against a trend of “stealth-Islamization” recently. She was instantly compared to Nazi Germany by Per-Kristian Foss, an openly gay man from the “conservative” party. Native Norwegians are already a minority in some school districts in Oslo — among them the above-mentioned Grønland area — and will be a minority in their own capital city within a generation or so if the current level of immigration continues, and in the entire country later this century.

When I was born, Norway was still almost 100% white and one of the most ethnically homogeneous countries in the world. If I live a very long life and remain here, I may live to be a minority in my own country. This in a country which gained its independence as late as the twentieth century and which has no colonial history. The “colonial guilt” argument which Multiculturalists often use as a verbal weapon against France, Britain etc. is invalid and irrelevant. Mass immigration is also heavily promoted in Finland, Sweden, and Norway. It’s not because of any “past colonial history”, it’s because we are white. Period.

NOTE: Why should the Norwegian Gay community trust that the police will take this incident very seriously? What evidence is there, that in Norway, everyone is subject to, and protected by, Norwegian law? What assurances are there that this gay bashing won’t become more prevalent in Norwegian society, when the police themselves are afraid to venture into Muslim no-go areas where it’s occurring? Just a thought. KGS