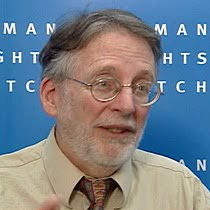 Joe Stork: And the media falls for my stuff
time and again, they can’t get enough!The Finnish newspaper, Helsingin Sanomat, fell for it big time, and something tells me that they won’t be advising their readers -about the guy responsible for the propaganda of Arabs in Gaza being shot at while carrying a white flag- is a rabid anti-Israel crank who supported the Munich massacre. No, the HS will just …filter it out…as if it never happened. KGSAUTHOR OF REPORT AGAINST ISRAEL
SUPPORTED MUNICH MASSACREUPDATE:Translated from Hebrew Original title: The Big Lie of HRW(Article by Ben-Dror Yemini, Ma’ariv, 16.8.09, p. 13)

Joe Stork, a senior official in Human Rights Watch, which accuses the IDF of killing Palestinians who waved white flags, is a fanatical supporter of the elimination of Israel. He was a friend of Saddam, ruled out negotiations and supported the Munich Massacre, which “provided an important boost in morale among Palestinians.”

Last Thursday, many world media outlets covered the press conference in which a senior Human Rights Watch official, Joe Stork, presented the report accusing >Israel of killing twelve Palestinians in the Gaza Strip who waved white flags during Operation Cast Lead. Stork, the person identified with the report, has a unique history of Israel-hating: He supported the murder of Israeli athletes in Munich, was an avid supporter of Saddam Hussein and more.

Several times in the past, Stork has called for the destruction of Israel and is a veteran supporter of Palestinian terrorism. Already as a student, Stork was amongst the founders of a new radical leftist group, which was formed based on the claim that other leftist groups were not sufficiently critical of Israel and of the United States’ support of it. Already in 1976, Stork participated in a conference organized by Saddam Hussein which celebrated the first anniversary of the UN decision that equated Zionism with racism. Stork, needless to say, arrived at the conference as a prominent supporter of Palestinian terrorism and as an opponent to the existence of the State of Israel. He also labeled Palestinian violence against Israel as “revolutionary potential of the Palestinian masses” – language that was typical of fanatical Marxists.

In articles which he authored during the 1970’s, Stork stated that he was against the very existence of Israel as an “imperialistic entity” and, to this end, provided counsel to Arab regimes on how to eliminate the Zionist regime. He also was opposed to any negotiations since this meant recognizing its existence: “Zionism may be defeated only by fighting imperialism,” wrote Stork, “and not through deals with Kissingers.”

On other occasions, Stork expressed his position that the global Left must subordinate itself to the PLO in order to strengthen elements that opposed any accord with Israel. It would seem that he has not changed his ways since then. He is still conceptually subordinate to those who have maintained their opposition to the existence of the State of Israel. Once the world’s radical left supported the PLO. Today, part of the global Left supports Hamas.

Stork, of course, is not alone. The hate ships that arrive from time to time, or attempt to arrive, to the shores of Gaza, are full of radicals of his ilk. They do not identify with efforts towards compromise or peace. On the contrary, they identify with those who are continuing the old line that supports the elimination of Israel. And what would happen if the PLO should decide to enter the negotiations track? Stork already recommended years ago that the Palestinian left splinter in order to continue the resistance. Hamas obeyed. It is possible to guess where Stork’s heart lays.

Where does Stork stand regarding matters of objectivity and neutrality? He criticized Professor Ibrahim Abu-Lughod, himself a PLO figure, because he edited an anthology which tried, at least seemingly, to produce a balanced presentation. “Academic neutrality is deceitful,” wrote Stork. And what about factual accuracy? Stork claimed that Menachem Begin said that, ‘The Palestinians are two-legged animals.” In fact, Begin said that those who come to kill children are “two-legged animals.” The difference is, of course, huge. Stork, time after time, justifies his high standing in the industry of hate and lies against Israel.

Stork reached his peak in a statement published by the Middle East Research and Information Project, which dealt with gathering information on the Middle East conflict, and in which Stork was a leading figure. This was a statement that included explicit support for the murder of the eleven Israeli athletes at the Munich Olympics: “Munich and similar actions cannot create or substitute for a mass revolutionary movement,” the statement said, “But we should comprehend the achievement of the Munich action…It has provided an important boost in morale among Palestinians in the camps.” Murder and terrorism, if so, are a matter of morale.

This is the man. A radical Marxist whose positions have not changed over the years. On the contrary. Objectivity, neutrality or sticking to the facts are not Stork’s strong suit. He even proudly exclaims that there is no need for neutrality.

Is it possible to relate seriously to a report against Israel which this man stands behind? Both >Camera and Professor Gerald Steinberg have revealed worrying data on the leaders of Human Rights Watch and on the two people who head its Middle East Department – Sarah Leah Whitson and Joe Stork – even before its latest report and unconnected to it. The organization, as part of its false presentation, issued polite condemnations of Hamas rocket fire. But it seems that such blatant anti-Israel bias leaves room for doubt. A Stork produced report on Israel is about as objective as a report by Baruch Marzel on Hebron.

Israel is called upon to provide explanations in the wake of Human Rights Watch reports. It is about time that Israel publicly exposed the ideological roots of several of this organization’s leaders and demands the dismissal of these supporters of terrorism and haters of Israel. Until then, Israel, justifiably, cannot seriously comment on criticism from such a body.