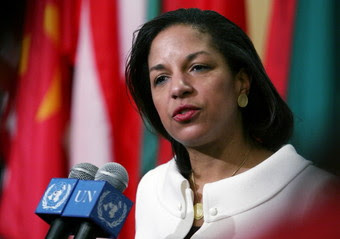 I believe that N.Korea is not a terrorist state
as much as I believe Bill Clinton was acting as a private citizen

Puhleeeeeze. Who does she think she’s kidding by saying that the US didn’t negotiate with terrorists during the high profile visit of former US president, Bill Clinton, to that nightmare state called North Korea?

Rice ridicules the former US Ambasssador to the UN, John Bolton for his remarks that Clinton’s visit “becomes periously close to negotiating with terrorists.” She couldn’t even hold back a smile when she said that the trip “was of a private citizen and that he was not speaking for the President of the US”. What a bald faced lie.
Watch the vid. KGS

NOTE: Here is what a real political analyst / expert has to say about Clinton’s visit.

John Bolton: “Former president Clinton was met at Pyongyang’s airport by notables led by Kim Kye Gwan, the North’s long-time chief nuclear negotiator, an unmistakable symbol of linkage. In Pyongyang’s view, the two reporters are pawns in the larger game of enhancing the regime’s legitimacy and gaining direct access to important U.S. figures. The reporters’ arrest, show trial and subsequent imprisonment (twelve years hard labor) was hostage taking, essentially an act of state terrorism. So the Clinton trip is a significant propaganda victory for North Korea, whether or not he carried an official message from President Obama. Despite decades of bipartisan U.S. rhetoric about not negotiating with terrorists for the release of hostages, it seems that the Obama administration not only chose to negotiate, but to send a former president to do so.”

Read Atlas’ interview with him as well. KGS