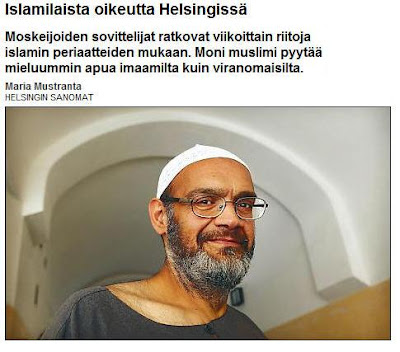 Khodr Chehab: You want Islamic sharia justice
come to me, I’ll let you have it!What’s worse, the Helsingin Sanomat ‘soft balls’ the whole issue surrounding these sharia courts, as well as wrongly comparing them with Jewish Beth Din courts or with Christian mediation services. The Helsingin Sanomat shows once again why it can’t be considered as a quality newspaper, it totally blows it where Sharia is concerned, for it’s much, much more than just a benign forum to mediate divorce matters between Muslims.For starters, one would have to ask why jihadists and Islamists everywhere are always fighting for sharia. Not just for Islam, not just for the protection of Muslims, but for the imposition of sharia. The same impulse that drives Islamists in both Somalia, Pakistan etc. and in European countries, is the same ideology, the same laws, the same supremacism. Allowing for sharia in the West is simply to encourage the supremacist impulse that leads to executions of little girls in Somalia etc.Jewish law hasn’t been practiced since the time of Jesus, ever since the Sanhedrin was dissolved, the Mosaic punishments are impossible to mete out. Whereas sharia is put into practice on a daily basis. Beth Din courts NEVER trump state law any more than the settlements meted out between Christians sitting before their pastor.Islamic law, or sharia, not only effects the inter-actions and relations between Muslims themselves, but also between Muslims and non-Muslims as well, something of which that far exceeds both Jewish and Christian doctrines. It’s an all encompassing system that once a portion is granted, the rest will soon to follow.The commenter Kumitonttu brings this to the TT’s attention, with the original (subscription only) article having been republished here for all (who read Finnish) can read for themselves. Here is what Kumitonttu has to say about it.
NOTE: This Imam, Khodr Chehab, leader of the Finnish Islamic Center, is one of the more vocal critics of the Danish Mohamed cartoons, as well as being on record as saying that “a 13 yr old is a good age to get married. He sees no difference in dating and getting married.According to the Finnish Islamic Council’s Imam, Chehab Khodr, the Justice Ministry gave permission for the 14 yr old girl to be wed in 1996. The groom was then 20yrs of age.[…] marriage can begin as an 11yr old, if secular law permits it.”

Kumitonttu: Helsingin Sanomat article is about Sharia courts in Helsinki. They’ve interviewed – not surprisingly – our old friend Khodr Chebab, who admits Sharia has already partially taken the major role over Finnish legislation in the lives of Muslims in Finland.

The article is traditional cultural relativistic in its spirit, as it for instance stating that “there’s nothing wrong with Sharia courts because Finns participate in similar couple therapies and marriage concils. The article is based on a Finnish born European woman, who “lost it” some years ago. There are a few, however, revealing and shocking sentences in the article.

First, wanna-be-Imam Khodr Chebab gives examples, when Sharia is needed. E.g. a husband mistreats the wife or the wife does not obey the man. The woman whose life is referred to says that, she “had to divorce because the man mistreated her and didn’t follow in other areas of living the true rules of Islam.

It is also very scary to see, that honor-murder has landed in Finland. The woman in the article says, that she “needed the divorce by Sharia because otherwise she could not have lived along. Adultry in Islam is a serious crime and will be punished by death penalty. If there’s no execution in this life, one gets it on the “judgement day”. For a humble Muslim this is a very serious case.”

What may make you wonder is the missing logic here. If the husband didn’t follow the mystical true Islam, why was the wife scared of the death penalty? Who knows, if she didn’t know better or if he actually followed the “true Islam”.

NOTE: In Islam the antithesis between the individual and the state or the government is not recognised, and no need is therefore felt to reconcile and abolish this antithesis. Islam knows no distinction between state and church. … In Islam there is no doctrine of the temporal end which alone belongs to the state and the eternal end which belongs to, and is the prerogative of, the church; no balance between the two; each equal to the other when acting in its own sphere; each equally dependent on the other when acting in the sphere of the other and no tension between the historic community and the church as custodian of the universal common elements in human existence.

The state is ”given”, and it is not limited by the existence of an association claiming to be its equal or superior, to which it can leave the preaching of morality and the finding of sanctions for its truth. It has itself to repress evil and show the way to righteousness; there is no clear-cut boundary between morality and legality. In practice, temporal power was often usurped and there was a de facto separation between the spiritual and the temporal but there was no ideological separation; no ruler, however much he may have violated the law, challenged the principle of its universal application.

The lack of any formal doctrine of a separation of such powers had important consequences in the field of individual freedom. It contributed to, if it was not actually responsible for, the creation of a situation in which power was arbitrary and exercised by the last despot who had usurped it. It also had important consequences for the attitude towards civil war and internal disturbances.