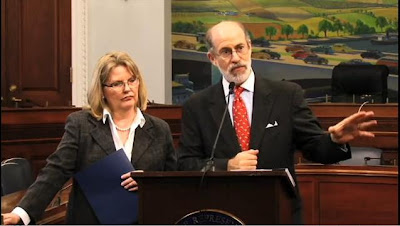 Frank Gaffney and Debra Burlingame :Violent Jihadis at Gitmo are as dangerous
as the Stealth Jihadis of CAIR
The Center for Security Policy conducted a press conference in the Longworth Building yesterday, concerning its recently published ‘Interim Guantanamo Legislative Report’, that ” provides, in detail, the policy positions of every Representative and Senator on the issue of closing Gitmo and transferring detainees to the United States.”The idea behind the press conference was to heighten awareness of the report’s release, to ensure that the average American citizen would be educated enough to approach their representatives in Congress and the Senate, and demand that the detainees in Gitmo would be kept where they are. The video of the press conference is viewable here, which runs about 40 minutes or so.Towards the end of the conference, a question was asked from, Debra Burlingame, sister of the pilot whose plane was commandeered on 9/11 and flown into the Pentagon, about the ‘Flying Imams’, the group of Imams that caused a commotion on a US Air flight due to depart from Minneapolis airport. The Imams were leaving from an Islamic convention in which CAIR, (the un-indicted co-conspirator in the Holy Land Foundation trial in Texas) may have played a hand in prompting the Imams to stage a scene on their departing flight. Here is what Frank Gaffney, President of the Center for Security Policy, said in a follow up response to that question. KGS

Let me make a related point if I may. We’re here today to talk about violent Jihad and the people who’ve been perpetrating it, or trying to perpetrate it against us. This question raises a whole different problem which has come to be called by Robert Spencer and others as Stealth Jihad.Another means to the same end, namely the triumph of Sharia, the practice, the code, theo, political, legal program that authoritative Islam teaches must prevail over all of us. And Jihad is a direct product of Sharia and it is to be practiced according to Sharia through violent means were possible and through other means were it’s not practicable.And the Council on American and Islamic Relations is a Muslim Brotherhood associated organization, we know this from documents introduced into evidence in the Holy Land Foundation trial in which five people were successfully prosecuted for money laundering in support, material support of terror.It was an un-indicted co-conspirator in that trial, and I don’t know if I can prove it, but my guess is that Debra understated its involvement in this particular case, because those Imams were at an Imam convention as I recall in Minneapolis before they got on the plane.My guess that Cair was at that convention and I would go even so far as to hazard, a guess mind, a guess, that this plot, this effort to provoke, to make a demonstration was actually cooked up with the full knowledge with CAIR. This Muslim Brotherhood front, this un-indicted co-conspirator would rally to their side and to promote their cause and try to compel, Us Air in this instance, the government, the airport authorities and everybody else to submit, which is what sharia requires…submission.So I join Debra Burlingame whose organization, as she most modestly says, not only supported these folks, but was instrumental in helping to make clear to all of us, the right in this instance, and it was not with CAIR, it was not with the Imams, it was with those who properly responded to deliberately provocative actions on the part of the so call ‘Flying Imams’.