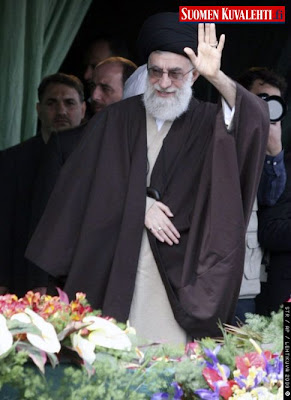 Ali Khamenei: Thank you SKL
for reminding me what Islam is all about

The nerve of a dhimmi Finnish magazine (Finnish equivalent of Time/Newsweek mag) for reprimanding an Islamic leader on the Islam he’s representing, and presenting to the people of Iran. Actually its the Finnish magazine that’s clueless to what Islam is really all about, and that Ali Khamenei is just acting on normal Islamic principles. Clueless Finns.Tundra Tabloid commenter, Kumitonttu sent the following (not online) information on an editorial in the Suomen Kuvalehti, 24th edition, 2009, in which the magazine offers the following nonsensical opinions on the way Ali Khamenei has handled the farse elections in Iran.

KS: “Ajatollah Khamenei hasn’t understood the deepest meaning of Islam: it was born to build peace between the fighting tribes.”Kumitonttu: Funny, I thought it was not born but it eternal! The SK continues:KS: “Islam has brought the light of civilization, religious tolerance and understanding of strange matters into Europe during the Inquisition times.”KS: “Eternal peace is a dream, but violent groups must be defined as heretics, nevertheless what religion they obey.”Kumitonttu: Hah, do they hire only idiots in the media?

Clearly, the Finns have been duped by the useful idiots here in Finland, like Jaakko Hämeen-Anttila and by visiting charlatans for “peace & understanding”, Tariq Ramadan and OIC sec-gen Ekmeleddin Ihsanoglu. The SK reproduced many of the Islamic talking points that’s been easily exposed as nonsense by the blogger Fjordman. To bad the KS editorial board spends time with the these spigots for Islamic propaganda, than with people like Andrew Bostom, Fjordman, Ibn Warraq and Ali Sina. KGS