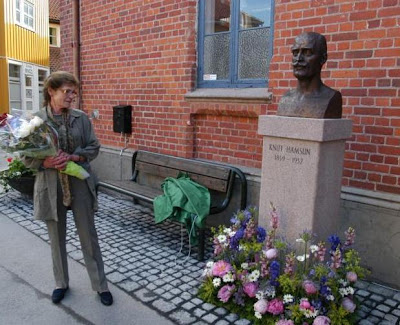 Granny pays homage to a man who gave
his Nobel Prize for Literature to Joseph Goebbels
The Knut Hamsun saga continues, as Nazi banners are flown above the bust of a man who openly sided with the Nazis, and their occupation of Norway. I guess the only reason why Hamsun wasn’t executed as a traitor along with Vidkun Quisling, is that unlike Quisling, Hamsun was a noted author. The Norwegians just couldn’t stand to shoot such a person with the command of the Norwegian language, so they made him a national figurehead instead. Here a loosely translated (Google trans of the article). KGS

Mayor Hans Antonsen reacts strongly on Monday that someone hung a Nazi flag over the bust of Knut Hamsun in Grimstad.GRIMSTAD: – I think it is a despicable act. These are streaks of the worst mob mark, Antonsen said to NRK. He reacts strongly that someone hung a banner over (hakekors) bust of Knut Hamsun on Knut Hamsuns place in Storgaten Monday afternoon, saying to the NRK. Therefore, the mayor opened yesterday’s (kommunestyremøte) to highlight their disgust at the incident. -We have a strong debate in Grimstad. It goes beyond all boundaries. This is the absolute worst example of it, “said Antonsen to the NRK. He has no time for those who speak out in this way. – There is doe someone in a positive way, I believe, to try and highlight a view, “he said. Bust of the author, was unveiled Friday only four days ago. Grimstad has had all these years after the war, a problematic relationship to Knut Hamsun, and now some actually have say clearly based on what they think about the author.