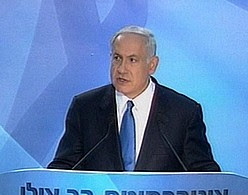 Bibi: It’s good to go back and identify
the dealbreakers and stick to them
*Scroll down for update.
Like the TT said, Israel will not be the spoiler here. Show who and what the real obstacles to peace are, and keep shining a light on them.
Bibi: “Let me use the most simple words – the root of the struggle is the refusal to recognize Israel as the Jewish state. The initial Arab refusal was to a Jewish state in any location, before Israeli presence in the West Bank,”
Like the Tundra Tabloids good colleague and friend, TINSC, always says, “In a world void of anti-Semitism, the War Against Israel (WAI) could not exist”. KGS
PM lays down conditions for peace in foreign policy address

Netanyahu said that he embraced President Barack Obama’s vision, adding, however, that the Holocaust was not the reason for the establishment of the Jewish state.
The prime minister said that the descendants of the Palestinian refugees must not be resettled within Israel borders and that Jerusalem must remain united. Israel, he said, would not build any new settlements or expropriate new land for existing settlements.
“Peace has always been our objective,” Netanyahu began. “Our prophets always envisioned peace; we bless each other with Shalom; our prayers end in peace.”

UPDATE: This is why it’s wise for Israel to state the obvious in an upfront, but non-confrontational way. The Arabs that call themselves Palestinians (ATCTP), whether they are Hamas or Fattah, cannot accept a Jewish state. The denial of a Jewish state and the vow for its destruction, is at the heart of the conflict….not settlements. Read the words which actually reflect the mindset of the Arabs, Israel’s insistence that they recognizes its Jewish character prompts the most bizarre, but true reflections of how these religious supremacists think.

YNET: “Hamas slammed Prime Minister Benjamin Netanyahu’s address on the Middle East conflict on Sunday, saying it reflected a “racist and extremist ideology.” “This speech reflects the racist and extremist ideology of Netanyahu and denies all the rights of the Palestinian people,” Hamas spokesman Fawzi Barhum told AFP. “This speech is the reiteration of the policy of his government, which aims at transforming the Palestinian people into a tool to protect the occupation.” (al-AFP) “