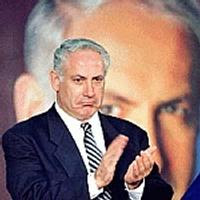 Bibi Netanyahu:
We bow to no oneThe Tundra Tabloids has said this an umpteenth number of times, and it still holds validity today. As long as the Palestinians continue to be a threat to themselves, they will continue to constitute an existential threat to Israel. Solve that, and you’ll have solved the Palestinian-Israeli conflict. Barack Obama is just another clueless politician who thinks that the Arabs are just interested in self determination, when the exact opposite is true. KGS
Netanyahu wants “maximum understanding” with U.S

JERUSALEM (Reuters) – Israeli Prime Minister Benjamin Netanyahu said on Sunday he would strive for “maximum understanding” with Washington on peace issues but gave no sign he intends to bow to its demand to halt settlement expansion.

Under pressure from U.S. President Barack Obama over settlements in the occupied West Bank and Palestinian statehood, which Netanyahu has not endorsed, the Israeli leader said he would set out his policies in a major speech later this month.

“I want to make clear, it is our intention to achieve peace with the Palestinians and with the countries of the Arab world while attempting to reach maximum understanding with the United States and our friends in the world,” Netanyahu said.

“I aspire to a stable peace based on the solid foundations of the security of the state of Israel and its citizens,” he told his right-wing cabinet at its weekly meeting.

By mentioning security, Netanyahu again highlighted an issue he has called paramount to Israel’s approach to peace with the Palestinians, whom he has said should have self-government but only limited powers of sovereignty.

In a speech on Thursday to Muslims in which he reaffirmed a U.S. commitment to the creation of a Palestinian state, Obama said Washington “does not accept the legitimacy of continued Israeli settlements.”

Despite the rare rift with the United States, Israel’s main ally, Israeli officials said Netanyahu has no intention of risking the collapse of his coalition by ceasing all settlement activity in the West Bank.

NOTE: Netanyahu knows that his coalition is more fragile than Israel’s relationship with the US, and will risk stretching that relationship to its max, in his attempt to protect his government against Obama’s push for a quick settlement with the unreformed/unchanged terrorist entity called the PA.