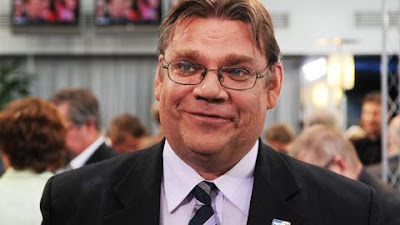 Timo Soini: Not bad, not bad at all!

The leader of the Finnish party critical of the EU and mass immigration policies, Timo Soini, of the Perussuomalainen party (True Finns), has reason to be grinning. His small party’s rising star has a lot to do with the issues surrounding mass immigration and anti-democratic EU policies and characteristics being debated publically by other Finnish political parties. Hats off to the PS party, may they continue to be a voice of influence on Finnish politicians. KGS

Finland will be sending representatives of two new parties to the Euro-Parliament: the True Finns and the Christian Democrats, who formed an election alliance. The Greens also won an additional seat.

One of the most-watched parties in the elections, the small True Finns Party holds only five seats in Finland’s Parliament. Party chair, MP Timo Soini – who secured a place as an MEP – has consistently grabbed headlines with a popular brand of Euro-scepticism. He was the runaway favourite among voters, collecting more than 130,000 votes.

He’ll be joined on the European stage with Christian Democratic Party Secretary Sari Essayah – a Finnish-Moroccan ex-athlete who won the World Championship in race walking in 1993. “It was a very good alliance because we share the same values,” Soini told YLE News.