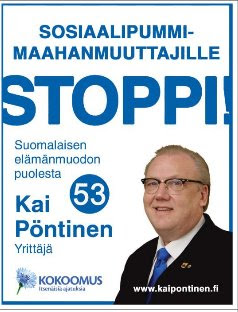 Yes, I do believe that the True Finns (and Counter-Jihad’s) message of resisting self defeating mass immigration polices of the political elite, is beginning to resonate throughout the political spectrum. I have seen on TV Pöntinen’s campaign ad, with the first thought being “did I really just see that”? The next thought that came immediately after that was, how long before the politicos reign him in for ….waaacist thinking? The other boot drops.

Translated from Finnish: Coalition Euro election candidate Kai Pöntinen’s EU election ad has raised many a hair upright.Pöntisen election ad has been shown, including on the front page of Friday’s Helsingin Sanomat. “A stop to social-wasting immigrants” is part of Pöntinen’s teaser. The same content is also in his television advertising.

Pöntinen’s campaign has aroused resentment even within his own Conservative Party ranks.

Yoday’s Ilta-Sanomat reported that the party secretary, Taru Tujunen, has been discussing the matter of the ad with Pöntinen yesterday. The Coalition does not accept this kind of language use.

It has been made clear to Pöntinen that immigration should be open to debate, but the Coalition will not tolerate intolerance, thundered Tujunen to the Ilta-Sanomat.

The National Coalition, (Kokoomus) won parliamentary elections last year, and sits right of center in the Finnish political system holding the majority of seats. But that will not stop the politically correct, multi-culti elite from reigning in suspected wacsists, the fear they have implanted into the social consious about racism runs deep.

It’s interesting to see however, that this plucky little candidate, Kai Pöntinen, was willing to speak his mind regardless of the deep seated Stalinist mind-think that exists within Finnish politics. It would be wonderful to see this guy cause a huge rift within the political status quo, and get elected to the European parliament. KGS

NOTE: To those who think Pöntinen’s choice of words reflects badly on all immigrants, thereby causing huge sweeping (negative) generalizations toward the immigration community, I say nonsense. Most rational, reasonable thinking people can see that many immigrants want to work, and are hard working like the host society. But one can’t deny that many immigrants are viewing Finland’s welfare system as an easy mark. It’s a two way street.