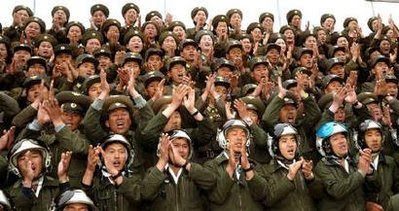 Remember folks, this is the backdrop to the same situation with Iran, which has been steadily building its nuclear capabilities regardless of sanctions and the countless carrots thrown its way. Once a rogue state develops the bomb, there is little the international community can do, outside of military intervention, to get these states to divest themselves from their nukes, the insurance of a nuclear weapons capability is enough to keep them from ever making a deal with the IAEA.

If the IC tries to pressure them with an ever increasing measure of draconian sanctions, we can all be assured that the only ones who will feel that extra pressure, will be the common folk of N.Korea, not the military and N.Korean Communist apparatchiks. The fact that they have the bomb(s), creates a whole new set of paradigms, that the international community is not even close to dealing with.

Now place this situation alongside the drama unfolding in Iran, that has seen the IC twiddling its collective thumbs over the past 8 or so years vis-a-vis the Tehran regime, one could then be forgiven for having a sense of déjà vu. And the Obama administration is keen on continuing the the same failed policies of the Europeans, with a “call to carrots” being the only means available in stopping the Iranians. Fools. KGS

NKorea says it has conducted a second nuclear test

SEOUL, South Korea (AP) – North Korea announced Monday that it successfully carried out a second underground nuclear test, less than two months after launching a rocket widely believed to be a test of its long-range missile technology.

North Korea, incensed by U.N. Security Council condemnation of its April 5 rocket launch, had warned last month that it would restart it rogue nuclear program, conduct a second atomic test as a follow-up to its first one in 2006, and carry out long-range missile tests.

On Monday, the country’s official Korean Central News Agency said the regime “successfully conducted one more underground nuclear test on May 25 as part of measures to bolster its nuclear deterrent for self-defense.”

The regime boasted that the test was conducted “on a new higher level in terms of its explosive power and technology of its control.”

In Washington, State Department spokesman Andy Laine said: “At this point, we’ve seen the reports and we’re trying to get more information, but we’re not able to confirm at this time.”