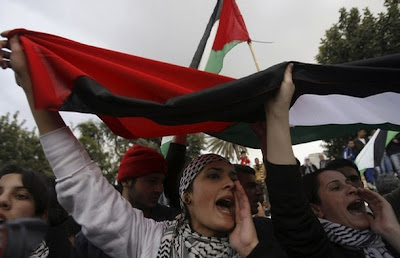 Hint: These Israeli Arabs waving the Palestinian flag
are already on record where they stand

Most Israeli Arabs certainly recognize the obvious that their lives and standard of living are far better off in the Jewish state of Israel, than in any of the neighboring states, or in any future Palestinian one. Besides enjoying a decent home, wage and workplace, the right to criticize one’s own leaders is a fundamental right within Israeli democracy.

Israeli Arabs know this, and many respect the freedoms that Israeli democracy affords, but there are those who actively work against the Jewish state, choosing rather, to align themselves with those who promote the destruction of Israel and its democracy. These individuals and the Arab parties they support, are the focus of the new legislation being presented in the Israeli Knesset.

Though in the West, the notion of loyalty to the state has long since been driven from the national consciousness, (no traitor outside of espionage will ever see the inside of a cell) Israel cannot afford to have an active fifth column gaining credibility for its disloyalty within its society. To allow such a scenario would be national suicide, and so demanding that all of its citizens be loyal to the state, which means participation in its military as everyone else, seems to be the logical step in maintaining social cohesion. KGS

Ministers to vote on ‘Loyalty Oath’

Foreign Minister and head of the Israel Beiteinu Party MK Avigdor Lieberman’s proposed “loyalty oath” for Israeli citizens will be brought up for a vote at a cabinet meeting early next week.

If passed, the law would oblige every Israeli citizen, including Arabs, to take the oath and sign a statement.

“Receiving citizenship under law will be conditional on a loyalty oath,” the proposed draft read. The draft also includes a clause on the wording of the loyalty oath, likely to cause disagreements:

“I commit to being loyal to the State of Israel as a Jewish, democratic and Zionist state, to its symbols and values and to serve the country as needed through military service or an alternative service, as decided by law.”

In the proposed draft of the legislation, signature of the oath is conditional upon receiving an identification card for those born in Israel. Furthermore, the law would bestow considerable power upon the interior minister who would have the right to revoke the citizenship of any person who fails fulfill their commitment to serve in the IDF or any alternative service.

An Israeli Arab “that gets it”.