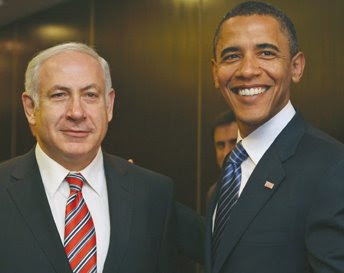 Let’s see which one blinks firstThe Apologizer-In-Chief meets with his Israeli counterpart, to discuss the “ME situation”, as if the ”ME situation” has everything to do with Israel. The Tundra Tabloids holds to the analysis that what ails the region most, are the backwater nations that have nothing, absolutely nothing to offer their citizenry other than autocratic/dictatorial/despotic rule, or an Islamic state, that’s it. Not a great alternative, but that’s what the humanitarian racists in the Left-wing think tanks and universities throughout the West (like the Finnish UPI) are advising the White House and other foreign Western governments. They hold the Arabs as inferior, not able to being up to our standards, so we pressure friendly Western democratic states in the region like Israel, to impale itself with yet another hostile Arab/Muslim state. KGSObama, Netanyahu meet amid U.S.-Israeli differences

WASHINGTON (al-Reuters) – President Barack Obama and Prime Minister Benjamin Netanyahu launched their first White House talks on Monday grappling with rare U.S.-Israeli differences over Middle East peacemaking and how to deal with Iran.Wading into the thicket of Israeli-Palestinian diplomacy four months after taking office, Obama planned to press the hawkish Israeli leader to endorse Palestinian statehood and freeze Jewish settlement expansion on occupied land.But Netanyahu, who heads a new right-leaning government that has balked so far at embracing a two-state solution to the decades-old conflict, appeared unlikely to comply.He was expected instead to urge Obama to put the elusive quest for Israeli-Palestinian peace on the back burner and make the campaign to curb Iran’s nuclear ambitions a more urgent priority. Israel, uneasy over Obama’s overtures to engage with Tehran, has not ruled out military strikes if diplomacy fails.Netanyahu’s effort to shift the focus of stalled peace talks away from tough issues such as borders and the future of Jewish settlements could mean a rocky road ahead in traditionally strong U.S.-Israeli relations. It puts him at odds with Obama, who has endorsed the goal of Palestinian independence, a cornerstone of U.S. policy for years, and has pledged to keep peacemaking high on his agenda.