One of the two 16-year-olds currently jailed was member of SPÖ:s
Rote Falken, the youth wing of Austria’s largest Socialist party. There was a shooting incident at the Ebensee concentration camp memorial last week, which involved Jewish survivors of the Nazi death camp gathered for a memorial to pay tribute to those who perished there, ending up being shot at with plastic bullets. It has now been determined that one of those involved belongs to the SPÖ’s political youth wing of the Rote Falken. Special thanks to ESW and Michael Collins for the scoop. ESW reminds the TT that the SPÖ is Austria’s number one leftist political party, and the ones (Ariel Muzicant, leader of vienna Jewish community) who are currently calling Strache (FPÖ party leader) a hate preacher and his sec-gen “goebbels like”. Looks like they need to look closer to home for signs of anti-semitism and hate-speech. KGSNOTE: “Adolf Hitler once said, how can one be a socialist and not be an anti-semite.”The Tundra Tabloids has been on record pointing out the obvious connection between the National Socialists and the Socialists/Marxist Communists….that there is a common thread that joins them together regardless if they are for domestic or for international socialism. They are all from the same political impulse.NOTE: A TT source says Muzicant is kissy kissy with the Muslims in Vienna. The TT would also like to point out that the FPÖ has a ways to go to distance itself from its anti-Israel stance, so I do not openly support that group either. The bench mark is high, and both parties on the Left and nationalist Left have to work hard to improve their battered image.Three taken into custody in neo-Nazi attacks scandal

By Thomas HochwarterThree teenagers who have admitted to firing plastic bullets at concentration camp survivors were last night (Tues) taken into custody after prosecutors warned they could carry out more attacks if they were allowed to go free. Alois Lißl, chief of the Upper Austrian security directorate said two of the three suspects put into preventive detention were 16 years old while the other was 17.Police had announced yesterday that four teenagers were questioned on Monday night while another one, 17, was tracked down on Tuesday morning.Lißl said police decided to put three of those suspects in preventive detention after prosecutors warned they could carry out more attacks.Police believe the arrested teens are leaders of the gang who shot at and verbally abused Nazi camp survivors near Ebensee last Saturday.Police chief Lißl said ongoing investigations have revealed the gang met regularly at the stone pit – where thousands of people were forced to work as slaves by the Nazis between 1938 and 1945 – to shoot plastic ammunition.The suspects are facing ten years in prison after admitting to firing at an Italian and a French group. The gang admitted carrying out the attacks to “provoke” and “make people upset.”

Here is a cheap Google translation of the SPÖ’s response to the incident.Embarrassing realization in Ebensee One of the two 16-year-old boys, by reason of the incidents in the Ebensee concentration camp memorial sitting in custody, was a member of the SPÖ-oriented children’s friends and even a Roter Falken (Red Hawk). The National President of the Children’s Friends, Bernd Dobesberger, looked horrified.
But Jews have always been victimized by the LEFT 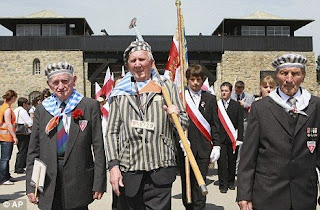