Skip to content
Home
/
2009
/
April
/
25
/
Bahrain
/
Crown Prince of Bahrain to F1’s S&M Boss Max Mosley: Welcome Back……!
Facebook
Twitter
Google+
LinkedIn
Pinterest
All is forgiven Max
in the ME we do it all the time
and with no apologies! 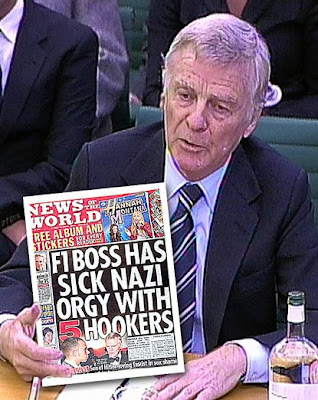 Max: Sorry about the hookers
but not about the uniforms

To make matters more clear, Formula 1 Boss, Max Mosley was filmed last year during an S&M session with five women who looked to be dressed up in Nazi uniforms. To make matters even more complicated for Max, his father, Sir Oswald Mosley had been a member of the British Union of Fascists during WWII, and Hitler was at his father’s wedding.

Max of course denies it all, but why would he be speaking in German to women clad in black inspecting his head for lice? Anyways….it didn’t matter to the FIA officials to reinstate ol’Maxie boy, and it sure isn’t a problem for Bahrain Crown Prince, Prince Sheikh Salman bin Hamad al-Khalifa. Wink and a nod. KGS