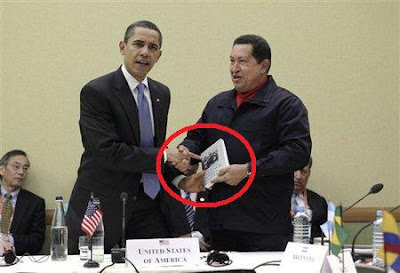 B.Hussein O-bow-ma: Let me first say that I both apologize for myself,
for being such an ignoramus, and for the US’s imperialist Yankee past

The man is a walking embarrassment, both he and his simpleton Secretary of state, Hillary Clinton, stay mute about the diatribe they were forced to hear from Daniel “Mr.Marxist himself” Ortega, and continue to carry on like nothing has happened. The only thing the US president could muster in response to the Ortega ‘history lesson’, was that “It was 50 minutes long, that’s what I thought.”The Fox report carried the headline of “Obama Endures Ortega Diatribe”, but the Tundra Tabloids doesn’t think he just “endured it”, more likely that he agreed with much of what Ortega was saying, and didn’t dare state his true thoughts. The man has during his whole adult history, has surrounded himself with far Left-wing radicals, and by default, has heard it all before, “enduring” such talk willingly. So I think that Fox news is being way too kind here, much more kind than what the Leftist press have done for GWBush over the years. KGSObama Endures Ortega Diatribe

PORT-OF-SPAIN, Trinidad and Tobago — President Obama endured a 50-minute diatribe from socialist Nicaraguan President Daniel Ortega that lashed out at a century of what he called terroristic U.S. aggression in Central America and included a rambling denunciation of the U.S.-imposed isolation of Cuba’s Communist government.Obama sat mostly unmoved during the speech but at times jotted notes. The speech was part of the opening ceremonies at the fifth Summit of the Americas here. Later, at a photo opportunity with Canadian Prime Minister Stephen Harper, Obama held his tongue when asked what he thought about Ortega’s speech.”It was 50 minutes long. That’s what I thought.”Secretary of State Hillary Clinton ignored two questions about Ortega’s speech, instead offering lengthy praise of a cultural performance of dance and song opening the summit. “I thought the cultural performance was fascinating,” Clinton said. Asked again about the Ortega speech, Clinton said: “To have those first class Caribbean entertainers on all on one stage and to see how much was done in such a small amount of space, I was overwhelmed.”A senior administration official declined to criticize Ortega, saying the president wanted to focus on the future. “His expectation is that these debates of the past can remain that, debates of the past and that the leaders can take advantage of this opportunity to focus on what they can do in the future to advance the interests of all the people of the hemisphere.”