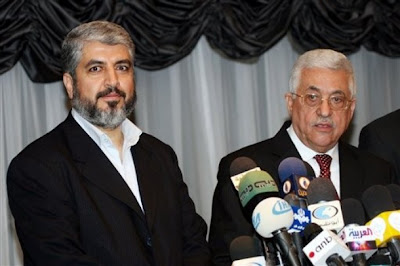 Mashaal & Abbas: Hell no to a Jewish State!

And the “peace crowd” can’t ever get it through their pointed little heads, that neither camps within the disputed territories want a Jewish state in existence, and the world’s leaders keep closing their eyes. Wake up people, when they say HELL NO, it means just that.

The Palestinian Authority and Hamas rejected over the weekend Prime Minister Binyamin Netanyahu’s demand that the Palestinians recognize Israel as the state of the Jewish people as a precondition for resuming the stalled peace talks between the two sides.

Netanyahu made the demand during a meeting last Thursday with US special Middle East envoy George Mitchell.

Mitchell met on Friday in Ramallah with PA President Mahmoud Abbas and other top PA officials, who urged him to pressure the new Israeli government to accept the two-state solution and honor all agreements signed with Israel as a precondition for resuming the peace talks.

Chief PA negotiator Saeb Erekat said that the demand to recognize Israel as a Jewish state was “an admission by the Israeli prime minister that he cannot deliver on peace.” Erekat pointed out that the PLO had already recognized Israel’s right to exist when it signed the Oslo Accords, while Netanyahu was refusing to mention a Palestinian state.

It’s all a bunch of blue smoke and mirrors that the PA under Arafat, recognized Israel ….”in da letter“. This admission lays that lie bare for all to see, who are willing to see that is, which leaves out O-bow-ma and his Mideast envoy George Mitchell, who are rushing to shove a Pali state down the throats of the Israelis.

WND: TEL AVIV, Israel – President Obama will move to create a Palestinian state “more quickly than anybody could imagine.” At least that’s the message the Palestinian Authority claims it received from the U.S.

A chief PA negotiator, speaking to WND from the West Bank city of Ramallah, said that in recent days Palestinian officials held preliminary meetings leading to an in-person confab today between PA President Mahmoud Abbas and George Mitchell, Obama’s envoy to the Mideast.

The whole mess stinks of course, and those of us -like the TT, Atlas Shrugs, Debbie Schlussel, Gates of Vienna, Sheik Yer’Mami and many more- who warned that B.Hussein O-bow-ma would spell bad news for Israel, will unfortunately be proven correct, as the Apologizer in Chief tries to ram-rod a pali state into being, long before they (Arabs who call themselves Palestinians) are anywhere near being able to manage one. KGS