The nerve of it all. Descendants of the Moors who conquerored Spain, demand an official apology from the Spanish descendents whose forefathers had managed to expel their former colonizers. 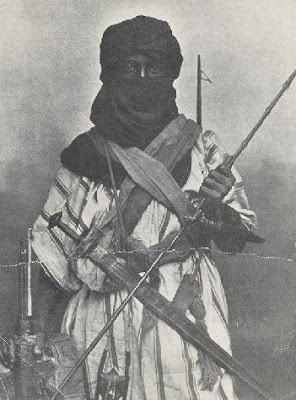 A Moor: Just who do you people think you are?
Once a dhimmi, always a dhimmi
That’s what is being demanded here, make no mistake about it. With the resurgence of Islamic awareness and pride, Muslims are demanding, and expecting, a return to the glory period of old when the non-Muslim “paid respect” to Islam and to their Muslim overlords.
The United Nations Alliance of Civilisations is nothing more than an OIC initiative to restructure the world order once again, this time in favor of Islam, it’s the main reasons why much of the UN is under Islamic influence and its organizational bodies corrupted. Islam wants our “respect”, but as Lars Hedegaard takes note in an email published at the Gates of Vienna, in response to a Turk’s demand for this “respect”:

Lars Hedegaard: “You talk about respect. Just how much respect are you proposing that we should show towards those who are planning our enslavement? Respect is not a human right. It has to be earned. If Muslims want respect, they should behave in a way deserving of respect. And, by the way, it would be nice if Muslim luminaries would begin by showing a little respect for the rights of others.”

But you see, they only view respect as, how much deference a non-Muslim pays to Islam, there are hardly any (if at all) sincere overtures in reciprocity towards the beliefs of the non-Muslims. Though individual Muslims, and perhaps even Muslim communities, practice a philosophy of live and let live, and to agree to disagree, such thinking does not exist within any schools of Muslim orthodoxy. Thus, while there are peaceful Muslims, there is no such thing as a peaceful Islam. KGS
Moors want Spain to apologise after 400 years

It was the start of one of the earliest and most brutal episodes of ethnic cleansing in Europe, so Spain is, understandably perhaps, a little reluctant to mark the occasion. Four hundred years ago today King Philip III signed an order to expel 300,000 Moriscos – or part-Muslims – who had converted from Islam to Christianity.
Over the next five years hundreds of the exiles died as they were forced from their homes in Spain to North Africa at the height of the Spanish Inquisition. There are no plans to mark the date officially, although the occasion is being remembered in a series of exhibitions, conferences and public debates.
The anniversary comes days after José Luis Rodríguez Zapatero, the Spanish Prime Minister, met Recep Tayyip Erdogan, the Turkish Prime Minister, in Istanbul to celebrate the United Nations Alliance of Civilisations, which is intended to foster friendship between the West and the Islamic world.
Some Muslim writers and Spanish and Moroccan campaigners believe that Madrid should apologise for the wrongs committed during the 17th century. Juan Goytisolo, a Spanish novelist, said: “Official and academic Spain retires into the fortress of cautious silence, which reveals obvious discomfort. The expulsion was the first European precedent … of the European ethnic cleansings of the last century.”
The anniversary highlights once again the uneasy relationship which exists between modern-day Spain and its Moorish, or Muslim, past. Muslims conquered much of the Iberian Peninsula in the 8th century after arriving from North Africa but, centuries later, their armies were finally expelled in 1492 after the victory of the Catholic monarchs King Ferdinand of Castile and Queen Isabella of Aragon.

Remember folks, wars, expulsions and domination of the other have happened throughout the history of the world, but yet it’s only the Muslims who want to remember only what “the others” have done, never what they themselves have inflicted upon the Non-Muslim world.
Islamic imperialism is responsible for, developing their own slavery trade which in turn fed the European slave trade, the making males into eunuchs which led to the death of hundreds of thousands, forced prostitution of females (harems), forced conversions and religious discrimination, enforcement of 2nd class status on non-Muslims (dhimmitude), apartheid societies divided up into Muslim and non-Muslim, and a whole host of other unpleasant facts.
When the Islamic world begins to contemplate their own misdeeds, perhaps then, and only then, will the West begin to take their calls for an alliance of the civilizations more seriously. But I’m not holding my breath for such an eventuality to ever take place, at least not in my lifetime. KGS
H/T: Baron Bodissey