Skip to content
Home
/
2009
/
March
/
16
/
Uncategorized
/
Dore Gold: Quartet’s Conditions Non-Negotionable…….
Facebook
Twitter
Google+
LinkedIn
Pinterest
President of the Jerusalem Center for Public Affairs (JCPA), Dore Gold, speaks about Hamas, the Palestinian Authority and the Quartet’s conditions, which set the parameters for future talks between Israel and the Palestinians. As far as the incoming Netanyahu government’s concerned, it’s the Palestinians themselves who will decide whether there will be any future talks. 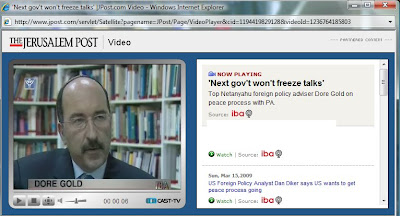 Dore Gold: If the Palestinians want to freeze themselves from talks,
all we can do is to give them a blanket

Dore Gold: Prime Minister designate Netanyahu made very clear that his problem isn’t over semantics, ‘can he say Palestinian state or can’t he say Palestinian state.’ The real question is what are the powers of the Palestinian state?Even those who advocate a Palestinian statehood among Israeli decision makers, understand that Israel cannot turn over the air space over the West Bank. There is the question of the electro-magnetic field, there’s the question of a self governing entity demilitarized? There’s the question of, can it it sign defense agreements with other countries? Do you want to have the Revolutionary Guards come from Tehran to Ramallah? Now these are all limitations on the control of the powers the Palestinians would have, and these are something that I think that Mr.Netanyahu wants to guarantee up front, rather than use the term ‘statehood’ and start negotiating it down. And when he explains that to American diplomats, they understand what he is saying.Question: If Hamas joins with the Palestinian Authority, how will Netanyahu be able to deal with that entity? Dore Gold: Well I think that it’s pretty clear from statements made by Prime Minister designate Netanyahu, and others around him, that Israel does not see Hamas as a diplomatic partner. And Hamas is a part of the international Muslim Brotherhood, it is a jihadi organization. It not only maintained a war against Israel over a number of years, but it has given sanctuary to organizations that are, that consider themselves as al-Qaida organizations, like Jaisha Islam, or Jaisha Luma.There simply is no way you can make peace with an organization that is dedicated to your eradication. Question: But if it does go through, how will Netanyahu be able to deal with just the P.A.? Dore Gold: I think that this will be a problem for the whole international community, because the Obama administration and many Arabs have said, that the Quartet conditions still apply. The Palestinians have to renounce terrorism, they have to accept the validity of the previous agreements, and we’re expecting to see that the Quartet’s decisions are kept. Question: So if not, it’s possible that we can see a complete freeze on any kind of negotiations with the Palestinians? Dore Gold: Well that isn’t the intention of the next Israeli government, to freeze negotiations, but if the Palestinians want to freeze themselves, well, there’s not much we can do, you know, except maybe give them a blanket.

While the distribution of portfolios has been set, the two sides noted in their agreement that should a national unity government be formed with Kadima, these may undergo changes.

As part of the deal, Israel Beiteinu was also promised a choice of deputy foreign minister, chairmanship of the Knesset’s Constitution Committee, and a representative in the Judicial Appointments Committee.