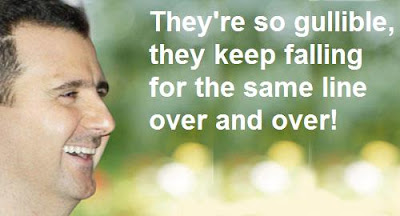 All you have to do is feign peace and they fall all over you!

US senator tells think-tank Assad told him Damascus willing to embrace Arab peace initiative from 2000, looking past Iran to improved relations with Arab countries and West, but adds: We should have no illusion that Syria will immediately end its ties to Iran

“Syria would like direct American participation in these peace talks,” said Kerry, D-Mass., the chairman of the Senate Foreign Relations Committee.

Reversing the Bush administration’s dismissive stance on Syria, Secretary of State Hillary Rodham Clinton announced Tuesday during a visit to Israel she would send two senior officials to Damascus this week.

Former US ambassador to the UN, John Bolton, knows that Obama’s new vision on US foreign policy for the Middle East region is decisively all wrong, it’s just a rehash of the old vision that predates Bush jr.’s. Running around the ME and offering incentives for good behavior is a mugs game that’s doomed for failure. It’s exactly that kind of European thinking that has allowed Iran to now have enough fissionable material to construct a nuclear bomb.

Bolton: The West’s collective failure to stop Iran’s nuclear ambitions has persuaded Iran that it faces minimal risks in greater adventurism on other fronts as well. Mr. Obama’s discovery of “carrots and sticks,” after a half decade of European failure to make that mantra a successful policy, will lead Tehran’s mullahs to one inescapable conclusion: They have won the nuclear race, absent imminent regime change or military action. Second, dealing with Hamas, Hezbollah and Syria as though they are unrelated to Iran’s broader threat is exactly backwards. Mr. Obama is again following Europe’s mistaken view that ending the Arab-Israeli conflict will help to resolve other regional problems. But concentrating on Gaza only increases Hamas’s leverage, just as negotiating with Syria only enhances its (and thereby Iran’s) bargaining power.We should deal instead with diseases, not symptoms. Changing Tehran’s Holocaust-denying regime could end its nuclear program, as well as eliminate its continuing financing of and weapons supplies for Hamas and Hezbollah, reduce its malign hold over Syria, and strengthen Lebanon’s fragile democracy. Taming Iran is not a magical cure-all, but surely addressing the central threat is more sensible than haphazardly dealing with the symptoms separately.

Once again an American administration is foolishly chasing down all the small players in the region, while the chief instigator, Iran, is free to proceed in establishing a new status quo, a nuclear Iran, which will most certainly change the dynamics in West-Middle East politics for ages to come. KGS