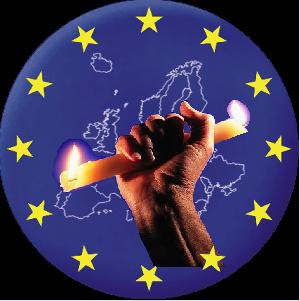 The Tundra Tabloids has repeatedly warned that the EU has been chomping at the bit for some time now, to open talks with Hamas with the hope in ending the blockade of the Gaza Muslim Brotherhood terrorist organization. The Independent now reports that the EU had met with Hamas representatives two weeks ago in Syria, proving that the TT was right all along.
Europe opens covert talks with ‘blacklisted’ Hamas

European nations have opened a direct dialogue with Hamas as the US intensifies the search for Middle East peace under Barack Obama.
In the first meeting of its kind, two French senators travelled to Damascus two weeks ago to meet the leader of the Palestinian Islamist faction, Khaled Meshal, The Independent has learned. Two British MPs met three weeks ago in Beirut with the Hamas representative in Lebanon, Usamah Hamdan. “Far more people are talking to Hamas than anyone might think,” said a senior European diplomat. “It is the beginning of something new – although we are not negotiating.”
Mr Hamdan said yesterday that since the end of last year, MPs from Sweden, the Netherlands and three other western European nations, which he declined to identify, had consulted with Hamas representatives. “They believe they made a mistake by blacklisting Hamas,” he said, referring to the EU decision in 2003 to add the political wing of the movement to its list of terrorist organisations. “Now they know they have to talk to Hamas.”
Political contacts with Hamas are banned under the rules of the international Quartet for Middle East peace – which groups the US, the EU, Russia and the UN – on the grounds that the Palestinian faction remains committed to the destruction of Israel. The international community insists that the ban will only be lifted once the Islamists agree to recognise Israel and renounce violence. But the policy, set out in 2006 following the Hamas victory in Palestinian elections, has been called into question since the three-week war in Gaza which is ruled by Hamas.

Pure nonsense and folly. This is the same type of reasoning one can find at the Finnish think tank, The Finnish Institute of International Affairs. Research assistant, Tuulia Nieminen, states a similar belief in the comment section to a post she wrote, concerning what policy should the EU take in light of the recent events in the ME crisis.
Tuulia Niemen: “The current approach has lead to a worsening of the situation; hence, I think that a different kind of approach is needed. It is impossible to predict the future, but the range of possible ways in which Hamas could develop is simply different in your and my prediction. Ultimately, only future will show which turns out to be the better prediction. However, guessing the right answer is not the issue here. What I am trying to say is that it is not a good idea to give the impression that a party to a conflict will never be approved to take part in the solution. That will weaken drastically the position of moderates inside the party whilst strengthening those who are strongly behind those exact policies which we hope would be given up. In other words, our own policy helps to lead the situation from bad to worse.”
Research analyst, Tuulia Nieminen, either grossly underestimates the religious supremacist underpinning of Hamas’ ideology, or simply refuses to believe that Hamas could actually be that far removed from the land of reason and logic, to think that it could actually be victorious against the Jewish state.
But what Nieminen is actually saying here, “is that in light of Hamas’ intransigence and genocidal agenda vis-a-vis the state of Israel, lets give the terrorist organization legitimacy it craves by engaging in dialogue with it, just because it’s been so successful in remaining an intransigent, highly genocidal movement, that’s even initiated hostilities which has led to the deaths of over 1300 people.”
Shocking.
Would European political research analysts of the same opinion be willing to entertain the same policy towards a religious supremacist movement here within Europe? If Europe (the EU) does indeed embark on such a fool hardy plan, they are then potentially opening themselves up to the very same scenario, when the Muslim Brotherhood in Europe becomes emboldened by Hamas’ successes, and begins wage a jihad against a fellow EU member state, in trying to carve out an enclave for Muslim self rule.
Sound far fetched?
One only has to look to other Muslim separatist groups that have managed to wage a war against a host state, with the Philipines coming to mind, as well as the Kosovars here in Europe. The Hamas’ war against Israel is not a local conflict, but a part of the overall Islamic jihadi movement, in which one success somewhere, creates a ripple effect elsewhere, for the advancement of Islam, the glory of their Allah and the whole Ummah.
So don’t be surprised if the Muslim Brotherhood becomes emboldened by the EU’s candle burning, and begins to arm separatist groups here in Europe. Placating Hamas could very well lead to future troubles with the Muslim Brotherhood here in Europe. I wonder if UPI research analyst, Tuulia Nieminen, has ever contimplated that, or is it just too scarry of a thought? KGS