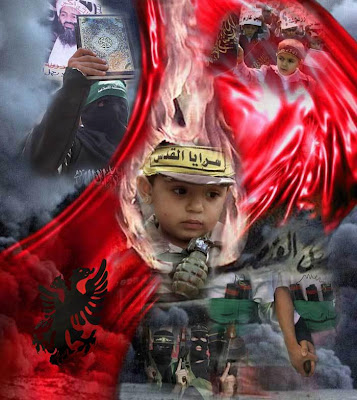 There are a couple of conflicting reports, but a picture is emerging that Kosovo Albanians were planning a terrorist attack in a cafe in the southern village of Strpce. Serbian TV news station B-92, reported on 16.02.09, that a man identified as Husa Arben, 24, was caught in the Serbian enclave with explosives:Albanian arrested with explosives“An ethnic Albanian was arrested this evening in a café in a Serb enclave in Kosovo after his suspicious behavior was reported, KiM Radio said. Kosovo police, KPS, in Štrpce detained the man and were holding him tied to the fence in the courtyard of the police station, awaiting specialized KFOR units, who determined that he had an unspecified amount of explosives in the pocket of his jacket. The man was identified as Husa Arben, 24. The area around the police station and the road that goes through Štrpce was blocked by strong KFOR and police forces.”Serbianna includes far more in its report:Kosovo Albanian with suicide vest arrestedA Kosovo Albanian from the city of Kacanik has been arrested in a cafe in the southern village of Strpce in Serbia’s province of Kosovo report police spokesman Arber Beka. The arrested Albanian wore a suicide vest loaded with explosives. He was arrested in the cafe called Kvatro around 8:00 pm today. Police and NATO troops have surrounded the perimeter and are investigating. The arrest came after a cafe patron spotted that one of the three Albanians who just walked into the cafe had wires under his jacket.

The police was immediately called in and after a search, the police found explosive in a suicide vest on the body of Arben Husi, one of the 3 ethnic Albanians who came into the cafe. In addition to the explosives, the police found a grenade and a Kalashnikov. The witnesses say that one of the Albanians ran out of the cafe, while the second one was held on. After the search, the police tied Husi up to the chair and then took him to the police station. It is not clear whether Husi planned to commit a suicide bombing or to just plant the explosive inside the cafe and activate it after.

Kosovo Albanians are overwhelmingly Muslim and radical Islam is on the increase ever since the Western states have been insisting that the Serbian province is independent. Strpce is located just under the slopes of the Sar mountains and is populated by Serbs. Few weeks ago, 2 Albanians stabbed a Serb from Strpce in a chest.”

Either way, some Muslim Albanians are being emboldened by their new found “independence” and want to strike terror in the remaining Serbian community and either drive them out, or intimidate them into rejecting their call for independence from the now Muslim majority Kososvo. KGS Via: the Sheik