Skip to content
Home
/
2009
/
February
/
10
/
Uncategorized
/
Wilders Refused Entry to the UK…….
Facebook
Twitter
Google+
LinkedIn
Pinterest
Dutch politician Geert Wilders Kept From the House of Lords after all
The UK shows just how weak in the knees it really is. KGS 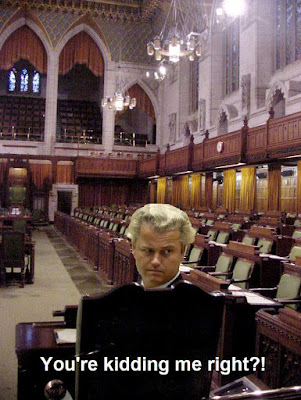 Banned from the UK

Dutch Right-wing politician and controversial anti-Islam campaigner Geert Wilders has been refused entry to the United Kingdom despite being invited to visit by a member of the House of Lords, the British parliament’s upper chamber. Mr Wilders (pictured), who was due to go to London this Thursday, received a letter today, 10 February, from the British ambassador to the Netherlands telling him that he was not welcome, reportedly because his visit would constitute a threat to public order. HandcuffsMr Wilders responded to the decision in fighting mood, telling Dutch media that he still intended to travel to London: “I’ll see what happens at the border. Let them put me in handcuffs.” Dutch Foreign Minister Maxime Verhagen’s response was also firm. He contacted his UK counterpart, David Miliband, by telephone and voiced his dissatisfaction that a member of the Dutch parliament – Geert Wilders is in fact also the leader of a political grouping, the Freedom Party – has been prohibited from entering a fellow European Union member state. InvitedGeert Wilders, perhaps best known outside the Netherlands for having made the video Fitna, in which the religion Islam and its holy book the Qu’ran are attacked as providing a basis for terrorist attacks and for the undermining of western democracy and values, had been invited to London for a showing of this film to members of the British parliament.

The Brussels Journal asks: Will Geert Wilders Be Arrested at Heathrow?

This morning Lord Malcolm Pearson, a member of the British House of Lords, announced that he has invited Geert Wilders, a member of the Dutch Parliament, to show the movie Fitna (see it here) in a committee room of the House of Lords next Thursday (12 February). Mr. Wilders has been asked to address a private meeting with members of the British Parliament, explaining to the Peers and MPs why he made Fitna and to engage in an open and frank discussion with them. This afternoon Mr. Wilders received a letter from the British ambassador to the Netherlands saying that he is a “persona non grata” in the United Kingdom. The ambassador told Mr. Wilders that he is a threat to public security and public harmony because of the controversy created by Fitna. Mr. Wilders intends to go to London anyway. “Let them arrest me in Heathrow,” he says.If Mr. Wilders is denied entry to the United Kingdom, it will be the first time that Britain refuses entry to an elected politician from another member state of the European Union. The Dutch government has protested to the British government over the unprecedented barring of an EU parliamentarian by another EU country.

UPDATE: Pamela has got the letter to Wilders from the UK Home Secretary

Atlas: Here’s the letter from the dhimmi office of the UK Home Secretary Jacqui Smith:

Mr Geert Wilders
For delivery via British Embassy in The Hague

The purpose of this letter is to inform you that the Secretary of State is of the view that your presence in the UK would pose a genuine, present and sufficiently serious threat to one of the
fundamental interests of society. The Secretary of State is satisfied that your statements about Muslims and their beliefs, as expressed in your film Fitna and elsewhere, would threaten community harmony and therefore public security in the UK.

You are advised that should you travel to the UK and seek admission an Immigration Officer will take into account the Secretary of State’s view. If, in accordance with regulation 21 of the immigration (European Economic Area) Regulations 2006, the Immigration Officer is statisfied that your exclusion is justified on grounds of public policy and/or public security, you will be refused admission to the UK under regulation 19. You would have a right of appeal against any
refusal of admission, exercisable from outside the UK.