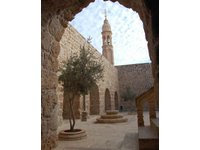 The Mor Gabriel monastery in Turkey -dating back to 397, some 250 years before the “meshugga” madman prophet had developed his jihadist ideology that swept over the Middle East- has come under the eyes of the local Imams, who want confiscate the oak covered hilltop on the Tur Abdin plateau and rebuild a fictious mosque that never existed.
Listen up folks, this is just history playing itself out time and again, these Imams know very well that the Christian monestary predates the advent of Islam, they more than likely feel emboldened to proceed with their farcical claim, since the central government has taken a more Islamist/fundamentalist line. KGS
TURKEY: OLDEST CHRISTIAN MONASTERY AT RISK
by Furio Morroni

ANSAmed – ANKARA – The Mor Gabriel monastery, the oldest Syrian Orthodox Christian convent of its kind is at risk of disappearing if a Turkish court decides on Wednesday that it is situated on land which belongs to someone else. The dispute, which has caught the attention of the world since the first hearing on January 12, is over land in the remote village of Midyat, in south eastern Anatolia close to the Syrian border. On a hilltop covered with oak trees on the Tur Abdin plateau – ”The mountain of the servants of God”, in Aramaic” – monks Samuel and Simon founded the monastery in 397 which was later enriched with buildings ordered by Roman emperors Arcadius, Onorius and Theodosius the Second. Three monks, 14 nuns and 35 young people who study religion and Aramaic live in the convent, which is the spiritual centre of the now sparse Syriac Orthodox community (3,000 souls) in Turkey. It is also the headquarters of the Bishop Mor Timotheus Samuel Aktash. Last August the Muslim heads of the three villages next to the monastery began legal action saying that the monks had unlawfully appropriated the land that the monastery is sited on and asking for its expropriation seeing that ”there was a mosque there in earlier times”. Despite the obvious absurdity of the claim – the monastery dates back to 397, around 170 years before the birth of the prophet Mohammed and the construction of any mosque – the Turkish Court of Justice has given its blessing to the legal action. According to some, the trial is intended more to protest about the monks’ supposed acts of conversion than to reclaim the land. Village chiefs are asking that the land be appropriated and divided into three, and that a wall built in the 1990s when the convent was in the firing line between the Turkish army and the separatist PKK party (Kurdistan Workers Party) be taken down. The accusations against the monastery are unfounded, said David Gelen, leader of the Aramaic Federation, who said that ‘a campaign of intimidation” is under way against the convent members.”The Bishop, monks and nuns are being threatened iin ever more direct ways by the inhabitants of the villages: they would not dare to appear at the trial to defend themselves in any way. For a long time, the monks and nuns have not had the courage to leave the confines of the monastery. Freedom of expression is guaranteed by the Constitution in Turkey. But recognition of minorities is not guaranteed. The Syriac Orthodox community, unlike the Greeks and Armenians, are not currently recognised as a religious minority, even though they have been on this land for thousands of years. The objective of the threats and the trial seems to be a way of punishing and expelling this minority from Turkey, like a foreign body”.