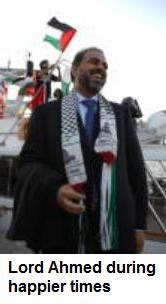 In other words, kick the Islamofascist out of the British House of Lords and into the nearest clink where he rightfully belongs. KGS

NOTE: The Sheik adds: “A sewer rat has more integrity than this Paki maggot. How the Brits could ever bestow the title of ‘Lord’ on this dog-turd we will never know. But there must be a way to take it away from him. Treason, blackmail, intimidation along with his hit and run car-accident should do him nicely. Too bad that the death-penalty for treason is no longer applicable.Perhaps the Brits could make an exception, just for him…