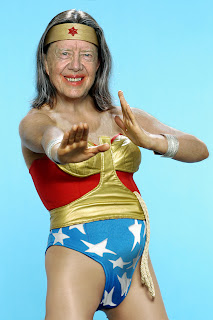 Jimmy Carter epitomizes the term, “useful stooge”. The former president has stood shoulder to shoulder with the worst of the worst that the world has to offer, but that in itself is not what makes Carter a useful stooge, for many politicians have had to be seen in public with leaders that they detest.
What separates Jimmy Carter from most Western politicians, both present and past, is that not only does he believe that “tyrants” can be trusted, he openly pimps their propaganda to the world in order to get them all on board his “band wagon of the deluded”.
The man dismisses with the wave of the hand Hamas’ charter, which expresses in detail their disturbing world views, as well as their deep racist bigotry and religious supremacism that’s wrapped tightly around the idea that Israel is to be destroyed, with an Islamic state rises up in its ashes.

But yet the man is more than willing to play Russian roulette with the future of Israel, and bring Hamas into the political process to discuss “peace”, while it’s dedicated to the destruction of Israel. Watch the video and then read CAMERA’s parsing of what he said, it’s very enlightening to see just how far off the beaten path of reality Carter is willing to go, in order to promote his fanciful vision of peace in the Middle East. A truly frightening display of cognitive dissonance.

No plan for peace in the holy land will work so long as it is based on dismissiveness of Hamas terror and historical revisionism.