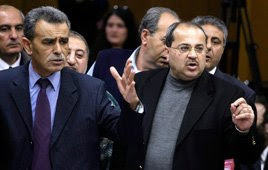 They should have been given the boot years ago. No government in the world would tolerate a political party to run for elections and stand in parliament, that was calling for the destruction of the state they are sworn to uphold and serve.

They should never had been allowed to form as a party as well, they are a disgrace and and a bunch of traitors. Yeah I know, it sounds good that Israel has Arabs in the Knesset, but at what cost, a grand stage to promote their high treason?

Central Elections Committee determines Balad, United Arab List-Ta’al parties ineligible to run in February 2009, on grounds that they don’t recognize the state and call for armed conflict against it. Tibi: This is a racist country
The party lists for the Arab parties Balad and United Arab List-Ta’al have been disqualified from running in Israel’s upcoming elections in February, the country’s Central Elections Committee ruled Monday, following a heated meeting.
Balad was disqualified by a vote of 26 to three, with one abstention, while 21 committee members voted in favor of disqualifying the United Arab List-Ta’al, with eight members voting against and two members abstaining. The Central Elections Committee is comprised of members of all party factions.

These treasonous rats should get down on their knees and thank the Jews for building them a society that is more than they could have ever hoped for in a Muslim Arab state. Kick em all out if they intend to keep being traitors to the state of Israel, rewarding their anti-Israel behaviour with a seat in the Knesset is the height of stupidity. KGS