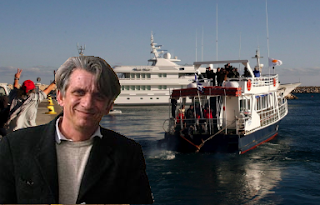 Beware of Lefty “goodist” journalists wanting to make a difference, they only end up screwing things all out of shape. The more they report, the less well informed people become.
Mats Gezelius: “We want to be the world’s eyes and ears in Gaza, Says Hufvudstadsbladet’s Mats Gezelius is one of the few Nordic journalists on board the so-called Free Gaza boat trying to go to Gaza with medicines, doctors and journalists on board.
The idea is that the boat will go to Gaza if we are not physically blocked, i.e. rammed or be shot at. Warning Shots or requests to turn, we will not bother us, “says Mats Gezelius on the mobile phone from Larnaca in Cyprus, just before the boat put out on their journey to Gaza. […]
The fight to come on board has been hard, because all the media wants access to the chance to enter Gaza and to report directly from the field. Those along are media giants CNN, BBC and Sky News. Israel has not allowed foreign journalists in Gaza since the offensive began December 27. “
Glory hogs, they are biting at the bit to be the ones getting all of the buzz once they set foot in Gaza. Telling the Islamofascists’ side of things will be the order of the day. Mats Gezelius writes for the Finnish-Swedish language papaer, Hufvudstadsbladet, and is a well known Israel basher, along with his old buddy Leena Reikko and Anna Negus. Stand by for more anti-Israel vitriol and demonization. KGS