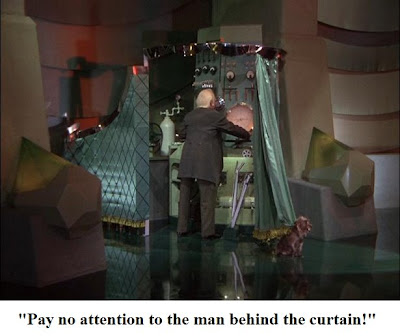 As king in his own emerald city, Charles Johnson has been busy seeing Fascist boogey men where none exist for some time now, and in his latest attempt at stanching the flow of disillusioned people drifting away from LGF, he sticks to he’s familiar modus operandi. It’s good that CJ Tool has now taken to pondering the true meanings of Fascism, especially since he’s been rather quick on the draw in smearing everyone with that epithet over the past year who dares to differ with him.

In taking a closer look into the characteristics of Fascism, Johnson is “stunned, stunned I tell you“, of how close the Vlaams Belang fills the criteria of “Fascism” described in Robert Paxton’s book titled “The Anatomy of Fascism“. Let’s put it this way, while CJ is indeed stunned, others who know better, understand that the criteria detailed in the book does not match up with the Vlaams Belang, only a superficial reading of the book with an ideological axe to grind, could someone come to that conclusion.

CJ states the following: “The correlation between these points, the tactics and positions of the Vlaams Belang, and the rationalizations of the “anti-Islamization” groups who are making alliances with them, is simply stunning.”

Ok, lets take a peek into Paxton’s criteria cited by Johnson, of which someone reminds the TT that the criteria fits in perfectly with Islam:

* a sense of overwhelming crisis beyond the reach of any traditional solutions;[The Vlaams Belang has long sought to become part of the Belgian ruling government (read= being a part of traditional solutions) to help solve the crisis which is Belgium, but has been sidelined into the permanent role of opposition.]
* the primacy of the group, toward which one has duties superior to every right, whether individual or universal, and the subordination of the individual to it; * the belief that one’s group is a victim, a sentiment that justifies any action, without legal or moral limits, against its enemies, both internal and external; * dread of the group’s decline under the corrosive effects of individualistic liberalism, class conflict, and alien influences; * the need for closer integration of a purer community, by consent if possible, or by exclusionary violence if necessary; * the need for authority by natural chiefs (always male), culminating in a national chieftain who alone is capable of incarnating the group’s historical destiny; * the superiority of the leader’s instincts over abstract and universal reason; * the beauty of violence and efficacy of will, when they are devoted to the group’s success

Now take a look at the Vlaams Belang Party platform or charter, and let me know after it’s read, exactly where VB charter matches up with the criteria in Paxton’s book. Do your homework, don’t take my word or Charles Johnson’s, look at the two examples yourself and then decide. Don’t place or insert something that’s not there. What a political charter states, is what that party supports, no more, no less. You decide for yourself, not CJ Tool. KGS