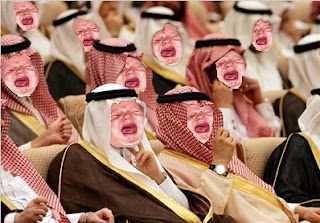 ‘On Gaard’, prepare yourselves for the masterful work of pictures and text by Hede & Wester! A new book is soon to be released about Islam’s main guy, the madman from the Arabian desert, Mohamed!

If one sets the ear to the direction of Mecca, the sound of wailing and crying can already heard, it’s almost as if one is standing in a crowded nursey room full of bawling babes. Waaaaaah!

In a colorful display of pictures and text, the esteemed Danish intellectual tag team of, Lars Hedegaard and Kurt Westergaard, have created a work that will most certainly cause another international uproar. Of course, it’s all up to the Islamic world itself on how they plan to behave. Will they take it on the chin like mild mannered adults living in the modern age, or like a room full of diapered tots, crying for attention and demanding that their needs be served?

The Baron wrote last night: “The article below, from the Jordanian news service Fact International, is a sign of what is to come. It announces the upcoming book by Lars Hedegaard and Kurt Westergaard, and is a sign that the Arab world is being primed for action. Muslims are being put on alert for the next Mohammed-riots. It’s as if their media are saying, “Everybody get to your battle-stations!” Notice that Abdul Wahid Pedersen is warning the authors (and Denmark itself): “You will pay for this!” The threat is not even veiled — he says the safety of Denmark is at risk, and the authors are holding the country hostage with their ill-advised actions.

Here’s the article from Fact International. OIC Sec-Gen Ekmeleddin Ihsanoglu is going to get his shorts all tied up into a knot over this one, bank on it. There’s going to be increased calls for more dialogue and understanding between religions, as if ‘dialogue between the faiths’ is going to change the fundamentally flawed nature of Islam itself. Fat chance. Face it, the only dialogue the Islamic world will be whining for, is the ‘one way discussion’ kind, the type that dictates what is permisable for us non-Muslims to do, and what is not.

New Danish Anti-Islamic Drawings to be Published SoonA new Danish book will be published soon containing a new episode of Danish cartoons insulting to Prophet Mohammad (pbuh) and critical of some leading politicians.The first Islamic reaction to this shameful act came from Muslim scholar Imam Abdel Wahed Pederson [sic] who described the new drawings as part of a (storm) Danish Muslims have been facing for many years. “The storm has been in words and sentences but now it has taken the form of cartoons,” he said.

Danish media sources revealed that the Danish cartoonist Kurt Westergaard has made new drawings to a book by Danish historian and writer Lars Hedegaard which will be published soon in Denmark. The 26 drawings and illustrations are demeaning to Prophet Mohammad (pbuh) and are critical of politicians, religious scholars and rulers.Danish caricaturist Westergaard is known for his anti-Islamic cartoons published by the Danish paper Jyllands-Posten in September 2005 and cause a violent protest by Muslims worldwideIn a statement to Danish News Agency (Ritzau), Hedegaard said the new drawings by Westergaard are disrespectful and satirical . Kurt’s cartoons show that he has no respect and mockery because politicians and tyrannical leaders are always depicted in a very glaring way, he said.

Irritating MuslimsImam Abdel Wahed Pederson said the new drawings represent a foolish act.“This is a foolish action. I did not expect Kurt to make these cartoons and I am very much upset from this,” Pederson said in a state to Akhbar.com website.

“They are pointless and have no meaning.” “These drawing have disappointed me and killed my hope for a better dialogue in Denmark,” he added.“It seems that Kurt has not learned anything over the past three years. I don’t know how he thinks. Is he really thinking of the safety of the Danish society? Pederson wondered.

In his comments, Westergaard said his drawings are no more than illustrations to further clarify the writer’s ideas. “I have my own ideas. I found it my duty to feature Lars viewpoints” in this book, he said in press remarks.

“We know that Westergaard and Lars have their own agendas to provoke Muslims but it is unreasonable to let those people always take the Danish community as hostages of their ideas and actions,” Pederson said.In reply to a question on his fears about his life, Westergaard said “I am 73 now and at this age I have nothing to fear. I want to be brave; otherwise one can not live his own life.”

In words addressed to Muslim community in Denmark, Westergaad asked Danish Muslims to get used to such drawings. “I have no problems with Islam. My problem is with terrorists who a model of Islam as a dynamite thinking for them,” he said.Our Muslim citizens get used to the idea that we in Denmark do not exclude anyone — politicians, the Queen, Allah — if he or she goes wrong“Although we are facing a strong storm against Islam, we will not keep silent and say our word and we will denounce these cartoons as we did before and if there is a chance we will make use of any possible legal action,” said Pederson.

Lars Hedegaard is chairman of the Printing Freedom Society which has invited the Dutch politician Gurt [sic] Wilders, publisher of anti-Islamic Fitna movie, to visit Denmark last June. Hedegaard is also one of the harshest critics of Islam. He will publish his book next month.

Yep, it’s going to get interesting real soon, bank on it. KGS