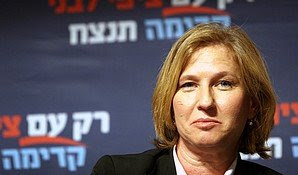 It’s just another reason why having Tzipi Livni at the top spot in the Israeli government during an Obama administration, is not such a good idea.

Livni has got to be kidding, but the sad thing is, most likely she really does believe in such nonsense, which means if there is any real kidding go on, it’s Livni kidding Livni. Having a weak ineffectual leader like Tzipi Livni at the helm in Israel during a time when a new, and very inexperienced US president, who has called for sitting down with Iranian leaders without preconditions, …is a major recipe for disaster.

Former US Ambassador to the UN, Johan Bolton said as much back in June of this year, when he warned that:

“Barack Obama’s willingness to meet with the leaders of rogue states such as Iran and North Korea “without preconditions” is a naive and dangerous approach to dealing with the hard men who run pariah states. It will be an important and legitimate issue for policy debate during the remainder of the presidential campaign.”Unfortunately, the American people were in no mood to worry about Iran and other foreign leaders, for if they were, Obama would have been taken to task for entertaining such naive ideas. The US media didn’t help things either by BEING IN THE TANK with the Obama campaign, failing to report on Obama’s simplistic thinking, which are not, by the way, to far off from the thinking of the unrepentant terrorists, William Ayers and Bernadine Dhorn.Israel needs a strong, experienced leader to counter-balance the naivety of ‘the new kid on the block’, who be able to resist the pushing and shoving which will be coming from an Obama administration early next year. This is a very intersting and precarious time we are living in, and it would be both a shame as well as a dreadful mistake if the Israelis succombed to the very same level of stupidity and mediocrity that is currently on display in the good ol’ US of A. KGS