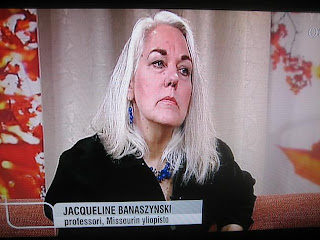 It’s always interesting to see the kind of Americans Finnish TV programmers invite to be interviewed on their television programs. More often than not, the Americans that qualify to be invited -to discuss any particular issue concerning the US- reflect the opinions already held by the Finnish interviewer and the station management.
Enter Missouri professor, Jacqueline Banaszynski who was questioned about her views concerning Barack Obama’s presidential election victory. The YLE Aamu TV interviewer, Tom Kankkonen, predictably asks his line of softball questions which allows the woman to bloviate on her perspectives about the Obama phenomenon, without really exploring the troublesome issues surrounding both the man himself and campaign he ran.

What we do get however, is a stunning piece of drivel that reveals just how much in the tank this woman is concerning Obama, and the US media which she represents, while categorically denying that the media is biased. It’s farcical to the umpteenth power and shows just what an echo chamber the media creates for itself, which is obviously something that stretches over international boundaries. The Finnish interviewer asked the Pulitzer Prize winner how she would describe the election of Barack Obama in a historical perspective.

Jacqueline Banaszynski: The election of Barack Obama is THE most historical event in all of US history!” 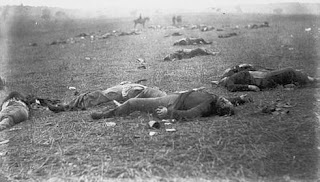 WHAT?! Puhleeeze. The Tundra Tabloids does indeed understand the historical significance of the election of Barack Obama to the White House, but to describe it as THE MOST historical event in all of US history … is flat out silly as it is ridiculous.

The Tundra Tabloids would place the American Civil War as THE MOST significant event in US history, which ended slavery and allowed for the eventual election of an African American to the White House.

Over 620 000 Americans died in that war, paying the ultimate price for the US’s regrettable clinging to the institution of slavery. That Barack Obama was elected is certainly news, in fact, it’s incredible news, especially since a man with so many skeletons in the closet got a free pass by the US media. But it could never outweigh in importance and in historical significance, to that of the American Civil war, which paved the way for Obama’s running for public office, let alone for the presidency of the United States.
Please take note that this is a journalist who won a Pulitzer Prize for journalism, who goes later on to state to a question about media bias, that the media treated both candidates fairly. She should read up on the UCLA study of Leftist bias in the US media.

What brass and twisting of reality by this woman, the media was in the tank for this guy, and that he got so far with explaining so little testifies to the overt bias of the US media. Banaszynski was lying through her teeth on Finnish TV, and Tom Kankkonen, the author of “Islam in Europe” in which yours truly, KGS, is mentioned, lapped up every word she stated without giving it further thought.

Jacqueline Banaszynski states that “when the media stands behind one candidate or the other, they take a closer, critical look into the candidate of their choice, so (paraphrasing) both candidates were treated fairly and critically by the media”. HAHAHAHAHAHAHAHA

I’ll leave it at that, for to talk endlessly about, just how much was purposefully missed by the media due to their need to get Obama elected, would increase the length of this post tenfold. Great going Tom Kankkonen, you once again redefine the meaning of mediocrity in journalism! Somehow I think that he would take that as some kind of compliment. KGS