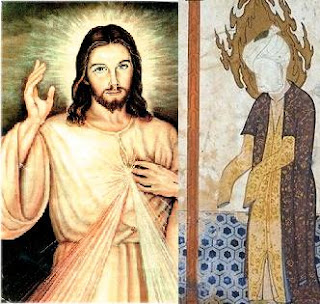 File this one under “Jesus has a human face but Mo does not”.

RABAT, Morocco – The Moroccan government has banned an issue of the French magazine L’Express International, claiming it insults Islam in articles exploring the relationship between that religion and Christianity.

Information Minister Khalid Naciri said Sunday that he had no choice but to ban the current issue because of the offensive nature of the articles it contained. The minister said the kingdom’s press code allows the government to shut down or ban any publication deemed to offend Islam or the king. The cover of this week’s L’Express is titled “The Jesus-Muhammad Shock” — also the title of a book by Christian Makarian, one of the magazine’s chief editors. The weekly said the series of articles was inspired by a meeting planned this week in Rome between Christian and Muslim scholars and is intended to “help the dialogue between Islam and Christianity.” Naciri did not specify exactly what was considered offensive, but told The Associated Press that “our country should not be used by anyone to spread articles that could be prejudicial to our religion or undermine public order,” A statement on L’Express’ Internet site said the magazine did not understand Morocco’s reaction, particularly because pains had been taken to adhere to Islamic norms, notably by covering the face of Muhammad with a white veil in side-by-side cover portraits of Jesus and Islam’s prophet, in line with Islamic law. The French edition leaves the face uncovered. The articles provide broad outlines of the two monotheistic religions. One article comparing Jesus and Muhammad quotes verses from the Quran that it says show that the Muslim holy book “justifies violence toward those who refuse to obey Muslim law.” It says that Muhammad the pacifist and Muhammad the warrior are united in one figure. Morocco, a tourism haven and strong European and U.S. ally, has seen a rising tide of political Islam. Makarian said on the Web site that L’Express is the only French magazine to issue a monthly supplement centered on Morocco, a former French colony. “We were banned despite this particular attention that shows our respect for the Moroccan public and the Muslim faith,” he said. “I don’t understand.”

Word of note: It’s because no matter what you do, it will never be enough to appease these types. All you need to do is look cross eyed in order to get these Islamic fanatics all pissed off. KGS