Skip to content
Home
/
2008
/
November
/
3
/
Uncategorized
/
Union for the Mediterranean: Barcelona Great for Capital Says Israel and the Palestinians…….
Facebook
Twitter
Google+
LinkedIn
Pinterest
But the devil is in the details. From a sane European perspective, the Union for the Mediterranean (UPM) is a nightmare of dhimmitude-in-waiting, but the EU mandarins are keen in joining Europe with the Muslim south, being more than willing to throw all caution to the wind in order to achieve their utopian goals. All bow to that god of multiculturalism which promises easy living, a nanny state intact, and lots of oil greasing the economic sled.

No need to ask the hard difficult questions of how “the great merge” will affect our lives once it becomes a reality, becuase most of these EU elitists are so far over the edge, they couldn’t spot a scimitar even if it was poking them in the back right before being pushed off the cliff.

MED UNION: ISRAEL AND PALESTINE IN FAVOUR OF BARCELONA

ANSAmed – MADRID, OCTOBER 29 – The two associations for local government authorities in Israel and Palestine demonstrated their support for the candidacy of Barcelona as the seat of the future permanent Secretaryship of the Union for the Mediterranean, inform sources today in the Catalan city in a message. Both the Association and the Local Palestinian Authorities and the Union of Local Groupsof Israel have demonstrated their support in two lettes sent to the Barcelona Town Hall.

For Israeli local government groups, according to Gaudi “it is the city that offers solid reception services with a more than evident Mediterranean vocation”. In the same terms, Isam Akel, executive director of the Association of the local Palestinian authorities underlined “all the efforts that the city has always made on an international level”. Barcelonàs candidacy received the adherence of the Spanish Federation of Municipalities and Provinces, as well a the main Spanish unions.”

But like I said, the devil is in the details. The Arab League plans to take part in this weeks meeting, in Marseilles, France despite Israel’s objections. According to EU Business:

“Israel has objected to the Arab League’s participation, saying it would oppose the Jewish state’s own presence in the UPM. When the UPM was launched on July 13, the League was granted observer status.”

The UPM may look on paper to be a worthwhile venture, but as long as it’s a union with anti-democratic Muslim states, the free democracies will be putting themselves at great risk of being subverted. Israel should take heed of what’s happening in Europe, if it wants to remain a viable Jewish state. Let the story of ‘Brer Rabbit and the Tar Baby’ serve as a stark warning to all.

Brer Rabbit kept on asking her why she wouldn’t talk and the Tar-Baby kept on saying nothing until Brer Rabbit finally drew back his fist, he did, and blip–he hit the Tar-Baby on the jaw. But his fist stuck and he couldn’t pull it loose. The tar held him. But Tar-Baby, she stayed still, and Brer Fox, he lay low. 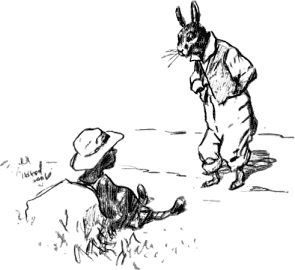 “If you don’t let me loose, I’m going to hit you again,” says Brer Rabbit, says he, and with that he drew back his other fist and blap–he hit the Tar-Baby with the other hand and that one stuck fast too.
Tar-Baby she stayed still, and Brer Fox, he lay low.
“Turn me loose, before I kick the natural stuffing out of you,” says Brer Rabbit, says he, but the Tar-Baby just sat there.
She just held on and then Brer Rabbit jumped her with both his feet. Brer Fox, he lay low. Then Brer Rabbit yelled out that if that Tar-Baby didn’t turn him loose, he was going to butt her crank-sided. Then he butted her and his head got stuck.
Brer Box walked out from behind the bushes and strolled over to Brer Rabbit, looking as innocent as a mockingbird.
“Howdy, Brer Rabbit,” says Brer Fox, says he. “You look sort of stuck up this morning,” says he. And he rolled on the ground and laughed and laughed until he couldn’t laugh anymore.
By and by he said, “Well, I expect I got you this time, Brer Rabbit,” says he. “Maybe I don’t, but I expect I do. You’ve been around here sassing after me a mighty long time, but now it’s the end.
H/T: Baron Bodissey