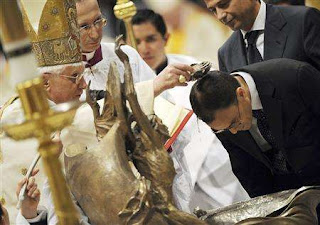 Muslim convert to Catholicism, Magdi Allam asks Pope not to consider Islam as an intrinsically good religion. Who should know better than the people who have been forced to live with it from birth.

Magdi Allam: “Islamic extremism and terrorism are the mature fruit” of following “the sayings of the Quran and the thought and action of Mohammed.”

I can imagine Tariq ‘Taqiyya’ Ramadan, foaming at the mouth over that one. Good.

VATICAN CITY (CNS) — The Muslim-born journalist baptized by Pope Benedict XVI at Easter asked the pope to tell his top aide for relations with Muslims that Islam is not an intrinsically good religion and that Islamic terrorism is not the result of a minority gone astray.

As the Vatican was preparing to host the first meeting of the Catholic-Muslim Forum Nov. 4-6, Magdi Allam, a longtime critic of the Muslim faith of his parents, issued an open letter to Pope Benedict that included criticism of Cardinal Jean-Louis Tauran, president of the Pontifical Council for Inter religious Dialogue.

In the letter, posted on his Web site Oct. 20, Allam said he wanted to tell the pope of his concern for “the serious religious and ethical straying that has infiltrated and spread within the heart of the church.”

One only has to gaze in the direction of Norway to see just how far that infiltration has crept into the Lutheran church, where in the name of ‘tolerance’ priests are committing sacrilege and receiving applause’s, when they actually should be cast out on their ears. More here. KGS