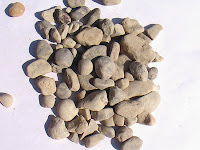 According to the followers of the madman from the Arabian dessert, the murdered woman, Aisho Ibrahim Dhuhulow “asked for it”. Such is the brainwashing power of Islam, where even the most defenseless of people can agree to become even more victimized than they were before.

Newsnow.com: THOUSANDS of people gathered to witness 50 Somali men stone a woman to death after an Islamic court found her guilty of adultery, witnesses say.Aisho Ibrahim Dhuhulow, who had been found guilty of extra-marital intercourse by a court in the southern port of Kismayo, was buried in the ground up to her neck while the men pelted her head with rocks today, the witnesses said.

“Our sister Aisho asked the Islamic Sharia court in Kismayo to be charged and punished for the crime she committed,” local Islamist leader Sheikh Hayakallah told the crowd. “She admitted in front of the court to engaging in adulterous sexual intercourse,” he said. “She was asked several times to review her confession but she stressed that she wanted Sharia law and the deserved punishment to apply.”

The execution was carried out in one of the city’s main squares. The port of Kismayo was seized in August by a coalition of forces loyal to rebel leader Hassan Turki, and the Shebab, the country’s main radical Islamist insurgent organisation. The new administration began implementing a strict form of Sharia (Islamic law).

The Tundra Tabloids wonders whether, Somali national, Zahra Abdullah, and Helsinki city council member (Greens) condemns Sharia, under which the brutal method of stoning is sanctioned and carried out?

For those of you who don’t know, Zahra Abdullah, is no Ayaan Hirsi Ali, far from it, this is a woman who vactions in Somalia, the very place she is a refugee from, and according to the blog of Jussi Halla-aho (in Finnish):

Perhaps Zahra was shy to tell the Greens (in other words the secularists and those interested in women’s and human rights issues) voting base that she enjoyed being in an Islamist controlled Mogadishu. While the Islamists were, among other things, forcing women into black sacks, engaging in cruel executions, and threatening to slit the throats of all who didn’t pray five times a day.” Perhaps Zahra was generally shy to mention she enjoyed being in Mogadishu, because Zahra and the Greens League considers Somalia such a dangerous place, that no one can be repatriated there, not even rapists, thieves and murderers.”

To be fair, there are many Greens not fooled by Zahra, and recognize the gross hypocricy mentioned by Halla-aho in his comments about the Helsinki city council member and Somali refugee, vacationing in the very same land she’s classified as being a refugee from. So, I believe it to be a fair question as to whether or not the Helsinki city council member is, for or against, the sharia, and its brutal judicial rulings? Just wondering. KGS

NOTE: No pictures or videos were allowed to be taken of the religious sanctioned murder, it appears that even in Somalia, they are aware of the bad press such pictures would create. Since many of their useful Leftist stooges in the West morally equate the Islamists with Christian Evangelicals, I can see why these Somali Muslims would not want the graphic images upset or disgust their main base of support.