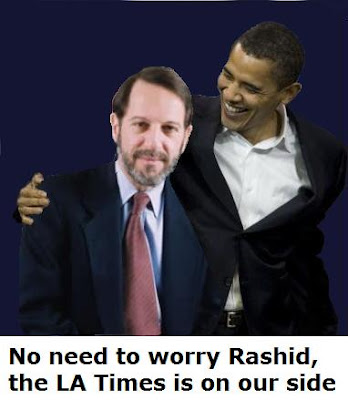 According to Gateway Pundit, the MSM is sitting on a video that shows Barack Obama attending the anti-Israel hate fest, in which he toasts Rashid Khalidi. Peter Wallsten from the Los Angeles Times, used a video he obtained from an anonymous source in writing an article on the relationship between Barack Obama and radical Palestinian, Rashid Khalidi, back in April of this year. Wallsten was one of the few journalists who have bothered to write about the connection.

According to the Gateway Pundit post, the video shows Barack Obama toasting the former PLO operative at the fare well dinner. Gateway Pundit also enquired from the journalist in question, about the video, and as to whether or not he plans to make the tape available to the public. The potentional fall out from the video against the Obama campaign cannot be understated, it’s a political bombshell. Wallsten said that “as far as he was concerned he was through with the story.”

It is also a fact that ex-Weatherman terrorists, William Ayers and Bernadine Dhorn also attended the party, so Barack Obama’s claim that he had only a passing relationship with the two terrorists is looking mighty slim. Just how deep does the rabbit hole go? If only the media was interested in doing some real digging, we would already have an answer to that question, it would have already become a matter of public record.

That Wallsten and the LATimes have been sitting on the video all this time, is an unthinkable act of political partisanship and bad journalism. Honest journalism goes for the heart of a story, and makes it known to the public, because they have the right to know, dishonest journalism knows of a story but for political reasons …deep sixes it.

According to Gateway Pundit, the same journalist, Peter Wallsten ripped off the Tundra Tabloids’ friend, Debbie Schlussel. Wallsten flat out stole Schlussel’s material that she willingly handed over to him, not mentioning her name once as a source for his article, and now he sits on video that could be potentially damaging to Barack Hussein Obama. What a lowlife slug.

Here’s is a video that speaks about Rashid Khalidi, and his ties to Barack Obama. The only irony here is that the guy doing the interview of Tundra Tabloids’ friend, Dr.Daniel Pipes, is none other than Sean “steal material from Schlussel” Hannity. When it comes to cribbing material from the blogosphere, pseudo journalists can be found from the ranks of both the Concervatives and the Leftists. KGS