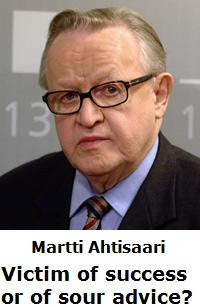 Though Marti Ahtisaari belonges to the Left, I’ve always admired him as an honest man. I’ve seen him on a couple of different occasions, though not on a personal level, but nonetheless, found him to be a regular person, in fact a good guy.
While it’s true that the Tundra Tabloids takes a dissenting view concerning his foray into Serbian/Kosovo politics, nonetheless, the TT placed him into the rare category of the Finnish politicians who could be trusted to deliberate and to think outside the box of traditional political thinking.
I hate to be proved wrong, but if the recent mutterings by the recent Finnish Nobel laureate prove to be true, the TT will have to sadly readjust its postion concering Martti Ahtisaari alltogether.
Peace is wonderful, but it can only be acheived with those who long for it, not with those who will use any advancement in the “peace process” as a means to destroy the other.
YLE: “Ahtisaari said he hoped that the next U.S. president would use the first term in office to solve the Middle East conflict. According to Nobel prize-winner a Palestinian state is a necessary part of the solution. He also criticized the boycott of the Palestinian Hamas-Party, since the party won by a relatively free elections.”
Dillusional.
That is the same kind of thinking that Heidi Huuhtanen, formerly from the Finnish Foreign Policy Institute (UPI), used to propogate to the Finnish political elite, before joining the inner circle of the Jordanian Prince. Such thinking is pure buffoonery, and if the Tundra Tabloids were to meet face to face with the former Finnish president, he would be told just that.
Though it’s extremely difficult for most to believe, especially the politician, Hamas would cease to be Hamas, if it were to recognize Israel. Allowing them to use a “hudna”, or temporary ceasefire that lasts 10 years, would only prolong the day when hostilities resume. Career politicians like Martti Ahtisaari are ignorant of the intransigence of Islamist parties like the Hamas. At least the TT hopes he is, for if not, then the problem of his recent blurbs are compounded ten fold. KGS
H/T: Harri S