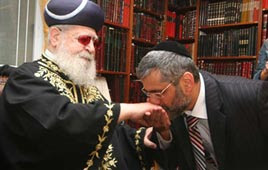 It looks like Israel will be heading into early elections come early next year, as Israel’s ultra-Orthodox Shas party refuse the invitation to join a Kadima led government. On the other hand, it might be a possible bid to squeeze out a few more extra carrots in order to sweeten the deal.

Regardless of which parties join a Kadima led coalition government, the fact remains that it’s very likely that Barack Obama will be sitting in the White House come January, and whoever is running the Israeli government is going to experience enormous pressure from such an administration.

Shas chairman Eli Yishai said Friday that the decision made earlier by the Council of Torah Sages for the party not to join the coalition was final. “As I said, the Council of Torah Sages decided this morning after a telephone survey and in accordance with the directives of Rabbi Ovadia Yosef that Shas will not join the government,” said Yishai at a press conference next to his home in Jerusalem. “The decision is final.”

Yishai said his party’s demands for the allocation of more funds to poor Israelis and for a commitment that Jerusalem remain united, demands which were not met by Kadima, were not personal, but were for the benefit of the entire country. “We have made our decision according to our principles. Shas cannot be bought.We will stick to out goals and principles,” he said. (edit: ha ha)

“A year ago, the decision was made in Shas that if [the division of] Jerusalem is discussed, it would withdraw from the government. Even more so, it will not join [a government] without a commitment not to negotiate over Jerusalem. Jerusalem is not for sale,” Yishai continued.

Well only time will tell, the Shas are notorius for renigging on deals, and then pressuring for better terms regardless of which party is courting them. But anyways, as I see it, the only way Israel can manage to not buckle under the pressure coming from an Obama administration, is for the stubborn Likud to be in control of the Knesset. At least that’s how I see things. More here. KGS