The Tundra Tabloids good friend, Andy Bostom delivers a highly informative essay on the link between Hitler and Jihad. What an article, and because it’s the Tundra Tabloids you’re reading, you get to read this article a full day before it goes online tomorrow. How nice is that? KGS 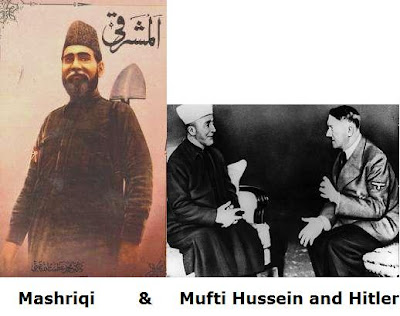 A recent report (summarized in translation here) by the Hamburg intelligence service —the Office for the Protection of the Constitution [Verfassungsschutz]— stressed the hostility of the neo-Nazi North German Action Office toward “Anti-Islamification” efforts in Cologne. At the North German Action Office’s [Aktionsbüro Norddeutschland], “campaigns” page website, links are featured with titles such as “National Socialists in Lower Saxony,” “Free! Social! National!,” and “May 1 — Day of struggle for national Socialism.”

The Hamburg domestic intelligence report noted the neo-Nazi group’s repeated allusions—commonplace in Nazi “analyses”—to the American “east coast,” which are meant to characterize “Jewish” domination of America and, by extension, the world. And in a statement published on its website (German link) September 25, 2008, five days after an “Anti-Islamification Congress” was banned by Cologne municipal authorities, the North German Action Office elucidated its solidarity with the global jihad:

Inasmuch as it is a determined opponent of the western-plutocratic one-world policy, we regard Islam, globally considered, as an ally against the mammonistic dominance of the American east coast. The freedom of nations is not threatened by Islam, but rather by the imperialism of the USA and its vassals from Jerusalem to Berlin.

Such concordance between Nazism and jihadism reflects an historical continuum evident since the advent of the Nazi movement. This nexus was already apparent in Hitler’s own observations from 1926, elaborated upon over the following decades by both the Nazi leader, and other key Nazi officials, and ideologues. Not surprisingly, there are two predominant, recurring themes in this discourse: jihad as total war, and the annihilationist jihad against the Jews.

Perhaps the earliest recorded evidence of Hitler’s serious interest in the jihad was provided by Muhammad ‘Inayat Allah Khan [who adopted the pen name “al-Mashriqi”—“the Orientalist” or “the Sage of the East”]. Born in the Punjab in 1888, al-Mashriqi was a Muslim polymath who attended Cambridge on a government scholarship, and excelled in the study of oriental languages, mathematics, engineering, and the sciences.

Not only did Mashriqi translate the standard abridged version of Mein Kampf (then
commonly available) from English into Urdu, during one of his sojourns in Europe, which included time spent in Berlin, he met Hitler in the early years of the Fuehrer’s leadership of the National Socialist [Nazi] Party. Their meeting took place in 1926 at the National Library. Here is the gist of Mashriqi’s report on his interaction with Hitler as described in a letter to the renowned scholar of Indian Islam, J.M.S. Baljon:

I was astounded when he [Hitler] told me that he knew about my Tazkirah. The news flabbergasted me. . . I found him very congenial and piercing. He discussed Islamic Jihad with me in details. In 1930 I sent him my Isharat concerning the Khaksar movement with a picture of a spade-bearer Khaksar at the end of that book. In 1933 he started his Spade Movement. More here.